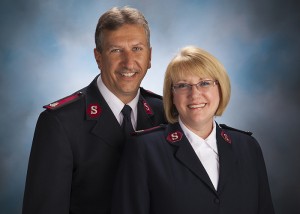 Majors Bill & Heather Holman were transferred to Grand Haven, MI in June 2019 after serving four years at the Grand Rapids Fulton Heights Citadel. Prior appointments were in Waukegan, IL (7 years), Mattoon, IL (4 years), and Belleville, IL (6 years).  They come to the Grand Haven area with great expectation of what God is going to do through them to build HIS Kingdom in and around this Community.

Born into The Salvation Army, both come with a rich heritage, understanding, and love to see The Army grow.  Bringing people into a saving knowledge of Jesus Christ is their first love as well as discipling them in their journey with God.

Bill is a fifth generation Salvationist and Heather a fourth generation Officer.  Both family lines date back to the beginnings of The Salvation Army in England.  Being faithful Soldiers (members) and leaders in their home Corps of Royal Oak, MI, it wasn’t until 1995 they felt the call of God on their lives to become full time officers (ministers) in The Army.  It was during the next year they would see God’s Hand on their family’s life to be very evident and faithful.  In August of 1996, they entered the College for Officer’s Training with their three children and were Commissioned (ordained) in June 1998.

The Holman’s have been married for forty years and have three grown children, two son-in-laws, one daughter-in-laws, and eight awesome grandchildren, (two granddaughters and six grandsons).

Their passion is to be encouragers of those they meet to have a vibrant relationship with Jesus Christ.