Last month Linda Budner was named Volunteer of the Year by the Emergency Disaster Services (EDS) unit of The Salvation Army’s Chicago Metropolitan Division. When presenting the award, EDS Food Service Coordinator Donna Ceglarek praised Linda’s dedication to do whatever is asked of her as well as her can-do spirit.

In her acceptance speech, Linda said it was an “honor and privilege to work with the people here” and spoke of how tired she often is at the end of a full day of volunteering, adding, “I had no idea that being tired could feel so good.” 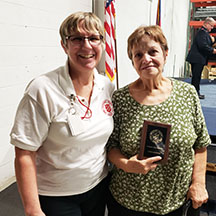 The honor came as a complete shock to Linda, who just two years earlier had been turned down by several other organizations she approached as a potential volunteer. Apparently they weren’t sure the then-69-year-old who had walked with a cane for decades would have much to offer. Boy, were they wrong.

In her two years volunteering with the Army’s EDS, Linda has assembled and filled Christmas dinner boxes, sorted food for the mobile canteen, served on the mobile canteen, participated in disaster and active-shooter drills at high profile locations throughout Chicago, and pretty much anything else the EDS staff has asked her to do.

One of her early memorable moments was helping in the wake of a fire at a women’s shelter on the city’s south side. The women and children were staying temporarily at a local church gym, and Linda was on the mobile canteen that showed up early to serve the kids breakfast before they went to school. It was a small gesture, Linda says, just some cereal and milk. But she said the looks of relief and appreciation made it clear: “This means something to someone.” Linda says that being part of a team that makes that kind of difference has been rewarding.

“I haven’t met anyone there who isn’t nice, helpful, and supportive – from the top down,” said Linda, adding that the EDS staff always takes time to thank her for her help and that the camaraderie with her fellow volunteers is a blessing. Besides the fact that they readily accepted her help, Linda was initially drawn to The Salvation Army because it’s a faith-based organization. And she was drawn to volunteer because she knows what it’s like to need help.

When she became a single parent years ago, Linda had a 3-year-old, a 6-month-old, and no job. During that difficult season, she was grateful for those who helped her get back on her feet. Following her retirement from working decades as a legal secretary, she realized the time was right to give back. Despite her age and health limitations, she thought, Why not now?

The staff at the EDS unit, where 80 percent of their work is done by volunteers, is grateful she joined their ranks. The feeling is mutual. “I actually get more out of it than what I contribute,” Linda said. “It’s gratifying knowing I can do something meaningful at this age. I only wish I thought to do this sooner!”

Join the Salvation Army's Fight for Good This Holiday Season!