What Substance Use Disorder and Homelessness Taught Theo Coleman

Theo Coleman lost everything to his crack cocaine addiction – his marriage, his house, his car, and his freedom. He tried to overcome his substance use disorder multiple times, always ending up back on the drug and doing awful things in pursuit of his next high.

“I hustled and pan handled to get money for my next hit,” Coleman said. “I had no pride at all. I had lost my desire to really do anything but get high.”

He would leave his family for a couple days at a time to go find drugs. One time his wife was fed up and said, “Next time you go out, stay out.” Theo now says he doubts she really meant it, but at the time he assumed she did. The next time he went in search of a high, he never went back home.

Now, not only was he lost in substance use disorder, he was homeless as well. “It was terrible,” he said. “I experienced the whole underbelly of addiction and homelessness.” Theo moved from house to house of friends who would get high with him and then let him crash at their place after. “If I didn’t have drugs, they didn’t let me stay long,” he said.

The most difficult part of that season, Theo says, was not having a secure place to lay his head each night. “It’s hard work being homeless. There was the stress of always looking for money for drugs. Then you gotta figure out something to eat, somewhere to hang out – because not many places let you loiter. And you need somewhere to sleep. It’s living minute by minute.”

The one night Theo slept on the street taught him a valuable lesson. He and a guy he was getting high with at the time slept on big pieces of cardboard outside a hotel. The next morning he watched the other guy wash up at a nearby Wendy’s. “I realized quick that’s not for me,” Theo said, noting that homelessness is complicated. “A lot of it I saw through the drug scene, but there are a lot of people on the street because of mental health issues or severe poverty or not having any family to help them through hard times. They’re not always addicts. They’re not always lazy.”

Theo ended up hurting a couple who had let him stay in their home while he was homeless. While they were on vacation, Coleman used his drugs in the house. When the crack ran out, he broke into one of their rooms and stole a computer and checks.

“I really found myself going against anything that I was taught – for this drug. For this crack cocaine. It was one of the worst times of my life.” Coleman served time for these crimes, and lost people who really cared about him. 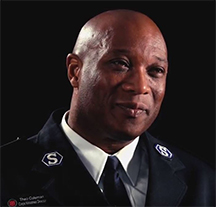 While coming down from a multi-day bender, Coleman reached out for help from The Salvation Army’s Adult Rehabilitation Center in Gary, Indiana. With help from some good Samaritans, he made his way to the bus stop and to Gary where Salvation Army staff were waiting to give him love, support, hope and strength to finally beat his substance use disorder.

Today, Coleman is sober 13 years and has given his life to God. He is the chaplain and Corps Ministries Director at The Salvation Army Red Shield Center in Chicago’s Englewood neighborhood. There he leads worship, shares his amazing vocal talent, and shepherds the youth through the minefield of temptation and heartbreak they encounter in their neighborhood. And he constantly shares his story so that others struggling with substance use disorder or homelessness can find the hope he did.

Theo is also constantly counting his blessings. “I have continual gratefulness. I saw a guy all bundled up on the side of the highway the other day, it was real cold too, and it was a reminder to never take my life and my blessings for granted.”

He also draws strength from The Salvation Army. “They helped save my life,” he said. “The Army is everything to me, so much so that I joined the organization.” Theo said he appreciates how the Army meets people at their point of need, and points to Salvation Army founder William Booth’s motto of “soup, soap, and salvation.”

“I came to them needing a place to stay and wash up. Over time, I met Jesus.” And over the course of his journey with substance use disorder and homelessness, Theo says he learned a valuable lesson: “God is always there, in darkness and in light.” Now whenever he faces challenges, he remembers how far God has brought him. He can almost hear Him saying, “If I got you out of that, this ain’t nothing.”