Protecting Vulnerable Neighbors Against the Harsh Realities of COVID and Winter

Over the past year, Richard Vargas has had a front-row seat to a few groups hit hardest by COVID-19: communities of color and homeless individuals. Richard and his Mobile Outreach team drive with The Salvation Army’s Mobile Feeding Unit that travels throughout Chicago every day providing a hot meal to those who need one at more than 25 locations. They visit homeless encampments and neighborhoods where people are barely making ends meet.

“COVID hasn’t changed what we do, but it’s changed everything around us,” Richard said. Every day his team puts on their face masks, packs up their big pot of homemade soup, and hits the streets, ready to serve whoever approaches their truck for assistance. 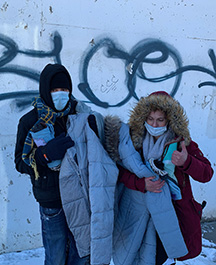 On a recent day, that crowd included a homeless couple who had just joined one of the larger homeless encampments in the city. “They had no coat or blankets. They were totally unprepared,” he said, adding that the couple was sleeping at night in another person’s tent, their one bit of defense against the frigid winter temperatures.

Richard went back to the The Salvation Army’s Freedom Center, where the Mobile Feeding Unit is housed, to get winter coats for the couple. When he gave them to the couple, they were overjoyed. “Man, this was a godsend,” the man responded. “This is amazing.”

Others in the encampment noticed and a few voiced their need for winter warmth as well. “One client turned into ten,” Richard said, explaining that he wound up making three trips to take more coats, as well as blankets and other items, to the encampment, all donated by a local company.

Richard didn’t mind the extra effort. “It allowed us to open a conversation about getting into a sober living situation,” he said. Harsh winter temperatures can be a strong motivator for finally going into a rehabilitation program, which many individuals living on the streets may need.

That’s why the Army’s Mobile Feeding Unit is usually followed by a Mobile Outreach Unit, manned by two caseworkers who provide immediate shelter assistance, enrollment in Salvation Army programs, or a referral to other needed services.

At the end of the day, that kind of lasting life change is the goal. The hot meals and the winter coats meet the immediate needs and start conversations in hopes that they’ll be there when a person is finally ready to make a change.

When COVID-19 first became a reality, the mobile units became much busier. Some organizations who serve these neighborhoods, as well as community-led volunteer food sources, disappeared for a time as they regrouped in the face of the pandemic, bringing more people to the Army’s trucks for help. The City of Chicago, which contracts this program, asked the team to also pass out PPE, sanitizer, and information on the coronavirus.

It was extra work, but the team knew it was important. “Early on, from about February through May, it was frustrating. People weren’t wearing masks and taking it seriously,” Richard said. “There was a lot of misinformation, especially in black and brown communities, that it didn’t impact them.”

But the exact opposite turned out to be true; COVID rates in minority neighborhoods have been much higher. It took the city shutting down for a time and the death toll rising to start changing thoughts and behaviors. “By June and July, we saw a turn in attitude,” he said.

Richard and his team also worried about their regulars in the local homeless encampments, knowing they were especially vulnerable to the virus. Many of them have other health issues, are of a certain age, or use drugs and alcohol to an extent that they are at greater risk. Plus, this community lacks regular access to information about COVID-19 and how best to protect against it.

Over the years, the team on the mobile units have become trusted voices to these neighbors, a responsibility they don’t take lightly. “Information was missing initially,” Richard said. “And people didn’t always trust what they did hear from city, state, and national officials. People need to understand testing and vaccinations – hear from local health agencies on the ground.”

To that end, the team manning the mobile units has partnered with the City of Chicago and the Chicago Department of Health to offer COVID-19 testing at homeless encampments. When these residents test positive, the City arranges a place for them to stay where they can be monitored and quarantined.

A similar effort to inform and engage these communities will be necessary as the vaccine becomes more available. “The communities we serve often don’t often have access to the internet or follow untrue or misleading information,” Richard said, “so there’s a lot of ignorance about COVID, testing, and the vaccine.” Richard and his team plan to change that. As they keep working as the hands and feet serving these communities, they now also become the mouthpiece speaking life-saving information – all in an effort to love these neighbors in the ever-changing time of COVID-19.