The Family That Rings Bells Together 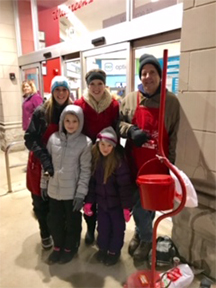 When Rob Hofmann accidentally tossed out a piece of mail 15 years ago, he had no idea that the absentminded act would one day lead to a treasured family tradition.

The piece of mail was from The Salvation Army, an organization Rob had always appreciated and had often donated money to at the holidays. Realizing he didn’t have much money to give the Army that year anyway – times were lean with three young kids at home – Rob decided to answer an ad he saw about volunteering to ring a bell at one of their red kettles.

When he later learned he’d raised more than $100 during his two-hour shift, he realized “that’s more than I could have given them anyway.” So he decided to volunteer the next year as well, and the year after that.

The following year he brought Ann, his 10-year-old daughter, along and noticed that the amount they raised nearly doubled. “No one can pass up a kid ringing a bell,” he said. He noticed similar results when his group would sing, whether they sang well or not.

Rob, now 62 and living in Lake in the Hills, said his group has grown over the years to include children, grandchildren, and nieces. And they all eagerly await the total they raise each year, hoping they’ve broken the previous year’s amount.

“The kids really like it,” Rob said, adding he takes them out for donuts after. A couple years ago, one of his 30something nieces and her daughter joined him. It was an especially cold year, but when he was driving home after their shift they called to say the young girl already wanted to join him the next year.

For Rob and his family, the reward for bell ringing isn’t just family bonding, but a chance to hear moving stories of lives changed. “Every year during that two-hour shift, someone shares a story of how The Salvation Army helped them or a family member,” Rob said. “The Salvation Army does touch people, not just here and how, but in a lasting way.”

Rob now volunteers with The Salvation Army in his community and with our Emergency Disaster Services. From that hands-on work, he says he feels good about where the money he and his family raises every year goes. “From what I can see, the money is well spent. They really answer the needs in the community.”

What will your bell ringing story be?