The Salvation Army of Central Indiana is celebrating National Donut Day a little differently in 2021. This year, 100 volunteers have signed up to bring sweet treats to men and women across central Indiana who have been a blessing to their neighbors and community. In addition to these surprise deliveries, police and fire personnel in Marion County have been invited to stop by one of three Salvation Army locations in Indianapolis to pick up a free donut and cup of hot coffee on the morning of National Donut Day on Friday, June 4. 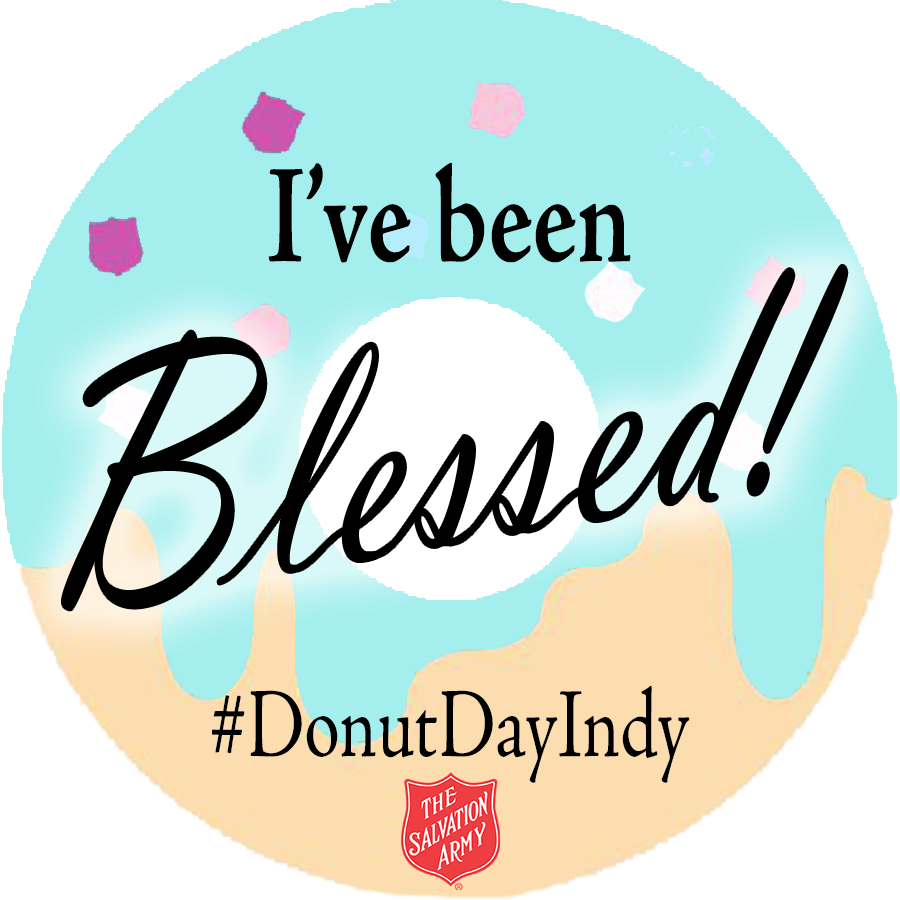 Thanks to a generous donation from Titus Bakery, on June 4 pre-registered volunteers will come to designated drive-thru locations on the city's north, west, and southeast sides to pick up two boxes of donuts - one for themselves and one for a person who they admire and would like to thank on National Donut Day. Each volunteer chose someone specific and submitted their story to The Salvation Army. As part of the "Get a Blessing, Give a Blessing" event, the volunteers will share photos of their donut deliveries on social media using the hashtag #DonutDayIndy. Volunteers will also enjoy a hot cup of coffee courtesy of Julian Coffee Roasters, which is brewing its special "Donut Day Blend" coffee just for the event.

Three Salvation Army locations in Marion County will provide donuts and "I've been Blessed!" stickers to volunteers from 7:00 a.m. to 9:00 a.m. on June 4:

Individuals and organizations chosen by volunteers range from first responders and teachers to neighbors who went above and beyond to bring light into the darkest days of the pandemic.

Here is just a glimpse of the 100 stories behind Friday's surprise "Get a Blessing, Give a Blessing" donut deliveries:

"[She] started a Facebook group at the beginning of the pandemic to encourage those in the group to reflect on something positive in their life, big or small. She hasn't missed a day of posting her 'cup half full' notes, which have gotten a lot of people through some dark times these last 436 days. This group has brought people from all over the country together each day for a little spark of positivity"


"This man is not only a coach to minorities, but also a youth minister. He helps and encourages young men who are without fathers with God's word. He goes above and beyond and could use a treat."


"The grief counselors don't get much recognition and they have helped us through a lot of grief, especially this year of our loved ones dying."


"My sister is an ED nurse and working 12 hour shifts the entire time through the pandemic (and now pregnant)!"

The Salvation Army has also reached out to police and fire units across Marion County to invite personnel to stop one of the three locations for a fresh donut and hot cup of coffee from 7:00 a.m. to 9:00 p.m. The men and women of these organizations have continued to serve our community under very difficult conditions over the past year, and The Salvation Army would like to recognize their sacrifice and perseverance throughout the COVID-19 pandemic. 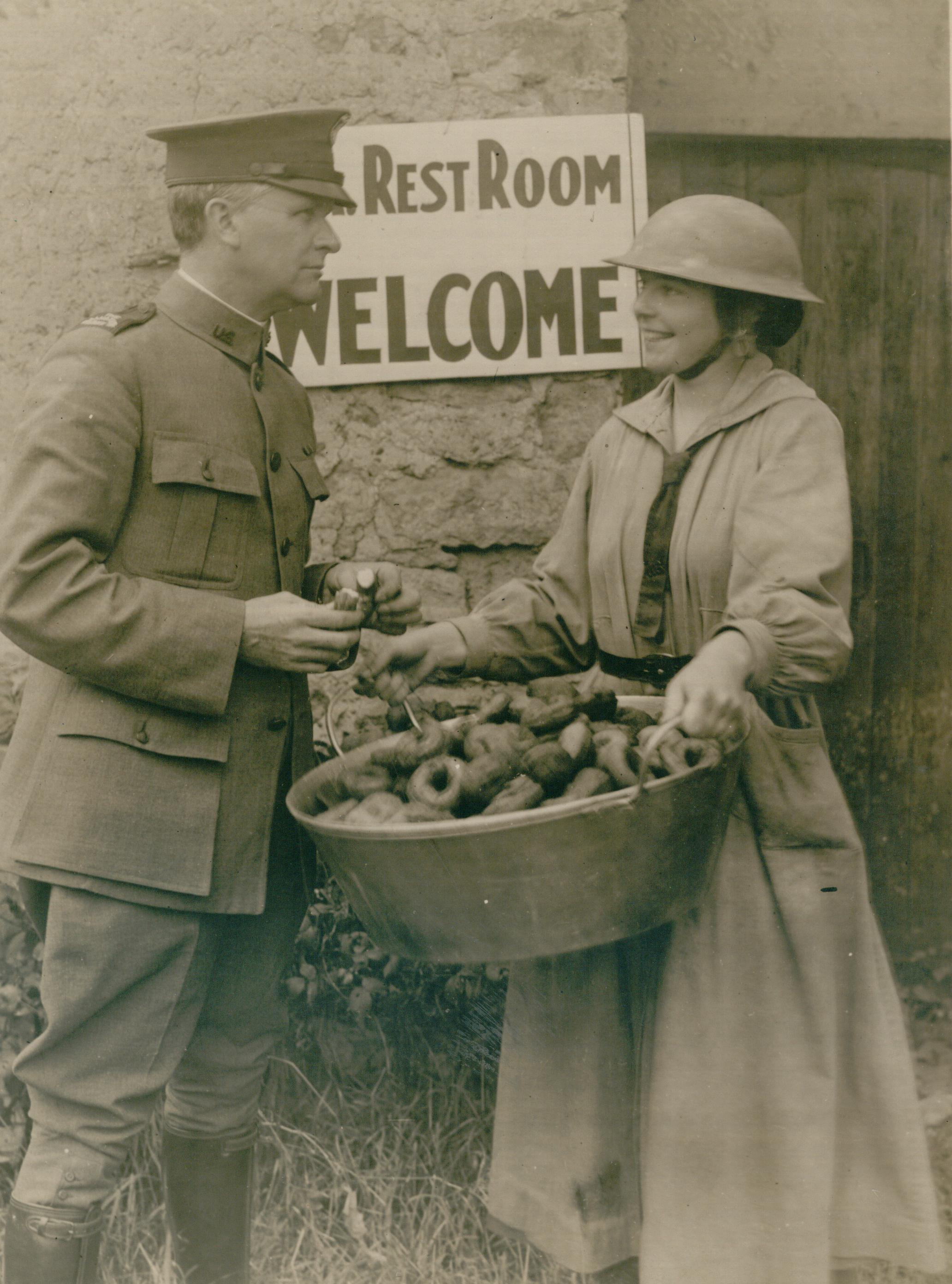 National Donut Day was first celebrated in 1938 in Chicago as a fundraiser to help those in need during the Great Depression. It also commemorated the work of the "donut lassies" that had served beside American soldiers on the front lines during World War I. The Salvation Army's mission to provide emotional and spiritual support to these young soldiers began in April 1917 with the deployment of just a dozen young women to the war zone in France. Eventually around 250 Salvation Army volunteers traveled abroad to help care for soldiers. Cooking special treats in battle conditions and with limited rations was a challenge, but two young women, including Huntington, Indiana native Helen Purviance, found a way to fry the first of the soon-to-be famous donuts. News spread, and it wasn't long before thousands of donuts were being fried daily all along the front.

When the American soldiers returned home, they brought with them fond memories of these "donut lassies" and a love for donuts. Today the donut still serves as a symbol of the comfort The Salvation Army brings to those in need through its many social services programs. Donuts, meals, and hydration are regularly served to first responders and others on the front lines during fires, emergencies, and disasters.

Stationed at each donut drive-thru on June 4 will be costumed reenactors honoring the legacy of the young women who served on the front lines more than 100 years ago. These Donut Girls, as they have come to be known, will join other volunteers and Salvation Army staff in saying thank you to those who have blessed our community over the past year.

Follow along on June 4 by searching for the hashtag #DonutDayIndy on your social media streams!