How JUMP Camp Is Helping Students Transition Back to School

When 5-year-old Cambree wakes up, he often asks his mom, Canentra, “Is it time to go to camp?” After the past year and a half of so much “no” and hunkering down at home, Canentra finds it refreshing four mornings a week to take her young son to The Salvation Army Midway Corps Community Center, one of three corps in the Metropolitan Division offering JUMP Day Camp.

“It gives me a chance to get back to work, while he gets to socialize and get off the screens,” Canentra said. In turn, Canentra and many of the other parents are grateful for trustworthy childcare at low or no cost to them. “Affordability is key. Every place else is so expensive,” said Jo, who takes her three grandkids to the Waukegan camp. “And the kids love it!”

Like so many things, summer camp looked different this year. For decades, The Salvation Army Metropolitan Division has bussed children up to our Wonderland Camp and Conference Center in Camp Lake, Wisconsin, for the time-honored rite of summer camp. This experience was especially important to children from low-income families, who rarely travel outside their neighborhoods.

COVID-19 and all the related health concerns changed that plan completely this year. But Army leaders didn’t want our children to go without, especially after a particularly challenging school year. So they came up with JUMP Day Camp – including Jesus-centered curriculum, Understanding the world through STEM activities, Music integration, and Physical activity – for first through sixth graders at our corps in Midway, Waukegan, and East Chicago.

JUMP Camp activities and Bible stories are centered on the fruits of the spirit, the nine scriptural attributes godly people are called to embody: love, joy, peace, patience, kindness, goodness, faithfulness, gentleness, and self-control. After a year of social distancing, it’s helpful to remember how to behave around one another. 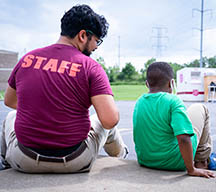 In Waukegan, camp director David Paredes loves reading Bible passages to the kids and engaging in conversation about their questions. “It’s so fascinating, their fascination with the Bible stories,” he said. “Kids have more capacity to listen and learn about that than we often give them credit for.” Valeria, one of his campers, liked learning about the beginning of the world, and Logan enjoyed “how David taught us to be nice to people.”

Lea Sims, camp director at Midway, likes to catch her campers being good, awarding them pins for tying someone’s shoe or voluntarily cleaning up after lunch. The person with the most pins each week earns a prize. She also connects this kindness with everyday situations. One day early on she noticed Aaron eating breakfast by himself and commented that it would be lovely for others to invite him to sit with them, which they did. Ten-year-old Amir is catching on, saying he enjoys that they “teach me a lot about God and Jesus, how we should do nice things and not be mean or bad or selfish.”

East Chicago camp director Kimberly DeSantiago hopes her students will relate the fruits of the spirit to the coming school year, saying they talk about how they can live them out in the classroom.

The Joy of Just Having Fun

Both the campers and their parents have been thrilled to have in-person activities again, with active group games being among the favorites. David has been surprised that musical chairs has been one of the Waukegan kids’ favorite activities. “They’ll play it for an hour,” he said in disbelief. 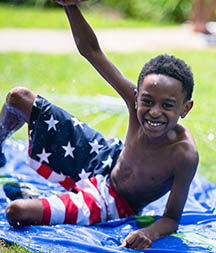 Kimberly says that while their East Chicago campers enjoy harvesting the foods they planted in their garden, spending time in their butterfly garden, and learning about nutrition from a Purdue University grad student once a week, their favorite seems to be group games in the gym. “Just having fun in general,” she said.

Aaron, a 10-year-old camper at Midway said ukulele was “hard but cool” and ballet was “pretty easy and fun.” He added that after a year of remote learning it’s kind of weird to be back with people every day. But he and many parents agreed it’s a nice transition to the coming in-person school year.

Latrecha, mom of 9- and 6-year-old campers, said, “It’s good that they’re interacting with other kids, especially after last year.” She also added that on a daily basis, “I can’t get in the door without them saying, ‘Can we tell you what we did at camp today?’” After a year of monotony and boredom, that’s music to any mom’s ears.