The Spirit of Volunteerism is Alive and Well in Detroit 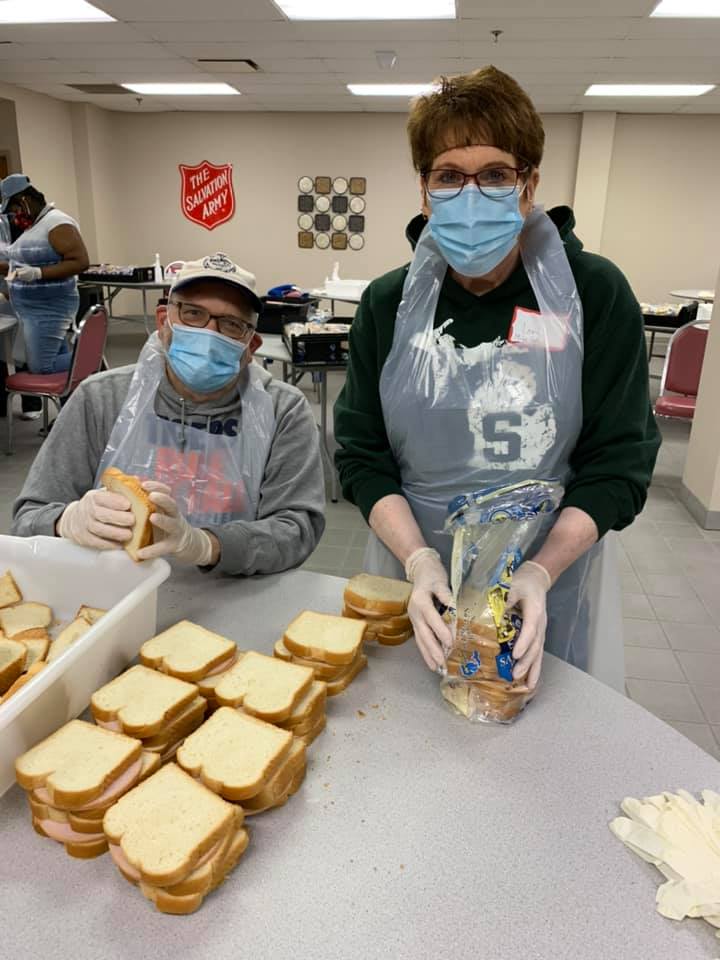 Lori and Deni Martin work together in smooth repetition at a small table in a Salvation Army cafeteria. The long-married couple's synergy shows as they rapidly make countless sandwiches, their cheerful, continuous banter creating a sort of rhythm with their physical efforts. Even masked, their smiles are visible: they truly love volunteer work.

“I’ve been doing volunteer work in some form since 1972, when I volunteered with Michigan State University’s Student Services Department. After Lori and I got married, we haven’t lost our volunteer spirit at all. We have volunteered with our church and just about anywhere else we could find.”

Lori was diagnosed with multiple sclerosis in 1990, and Deni has dealt with complications due to Parkinson’s disease since 2003. Nonetheless, the couple has signed up for a 4-hour volunteer shift to make sandwiches for The Salvation Army of metro Detroit’s Bed & Bread Club. After learning that there will be 3 separate shifts of volunteers, the couple vows to make sure their group sets the record for the amount of sandwiches made. Deni sits and Lori stands as they bag countless sandwiches that will go out to feed Detroit's most vulnerable citizens.

“I heard about the opportunity on Facebook, and I knew Deni would be game before I asked him,” says Lori. “I love volunteering because it helps you forget about yourself and your own problems. It forces you to think of others, which is what we are supposed to do.”

This is the couple’s first time volunteering for the Bed & Bread program, but Lori’s history with The Salvation Army goes back to her mother. Born in the Great Depression, Lori’s mother grew up in poverty. Later in her life, she would tell Lori that The Salvation Army kept her family together. When they struggled, The Salvation Army provided food, Christmas gifts, and holiday meals.

“I always kept what she said in the back of my mind: ‘The Salvation Army is a wonderful organization.’ And now, I’m glad to be volunteering for them!”

Deni’s impetus to get involved is slightly different but no less heartfelt.

“I was born in Detroit, and so were my parents. I feel a certain commitment to the city itself, and it’s amazing how many people The Salvation Army is able to reach through Bed & Bread. There is a need here that they are meeting.”

By the end of their shift, Lori and Deni’s entire group has made 4,100 sandwiches, which will indeed be the highest count that weekend. They are exhilarated and exhausted. A few days later, Deni remarked that he slept extremely well that night.

“You can make the amount of sandwiches you want – you don’t have to go to the gym regularly to volunteer for this. If you can put lunchmeat in between bread, then you’re cut out for this opportunity. It’s a simple but powerful way to give back: one sandwich could be life changing for someone.”