Despite frigid temperatures, more than 100 families made their way to The Salvation Army Harbor Light Freedom Center in West Humboldt Park last Friday for the Chicago Bears Neighborhood Pantry. This event, hosted by The Salvation Army, the Chicago Bears, and the Greater Chicago Food Depository, is the second of three food pantries planned this winter for neighborhoods on Chicago’s south and west sides known as food deserts.

Regina, one of the pantry patrons, is a mom of two who was already feeling stretched to the limit with the pandemic. Then CPS schools closed suddenly for several days, only compounding her challenges. She’s received help from The Salvation Army for years and was grateful for the extra help at the Bears Neighborhood Pantry. 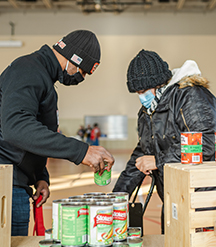 “When you come to places like this, and they’re so loving and so caring and willing to help, just a lot of people struggling all over Chicago, I’m really grateful, grateful and thankful,” she told CBS 2 reporter Shardaa Graves.

Lamont, another attendee, couldn’t stop complimenting the pantry as his personal shopper took him around to the tables of dry goods, fresh produce, meats, bread, milk, flowers, and soup provided by Campbell's Chunky. “This is better than most food pantries,” he said, adding that he especially liked the way it was laid out.

Another shopper was impressed with the wide selection of fresh fruits and vegetables. “I love avocados!” he said when he saw bags of them available in the produce section, noting they would be a rare treat. 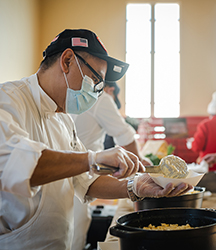 Ike Hill, who was a wide receiver for the Chicago Bears in 1973 and 1974, said that volunteering for events like this pantry is the right thing to do. He said he grew up in a low-income neighborhood and made a life for himself thanks to help from many people and organizations. “Now is my chance to be that person for someone else,” he said.

Another extra at the pantry was the cooking demonstration by a chef from Flik Hospitality Group, the Halas Hall food service provider. Head Chef Jonji made a chili mac and cheese with ingredients available at the pantry, delighting clients with free samples of the comfort food.

As she left, one pantry shopper eyed her overflowing cart and told the staff and volunteers, “Thank you for having me. Wow, what a blessing!”

The next Chicago Bears Neighborhood Pantry will be February 2 from 9:00 a.m. to 1:00 p.m. at The Salvation Army Adele and Robert Stern Red Shield Center in Englewood (945 W. 69th Street, Chicago). Learn more at salarmychicago.org/bearspantry.