It’s nothing short of a miracle that Eduardo is still alive. In 2020, he overdosed on heroin three days in a row. Even the EMT who saved his life repeatedly noted, “This is the third time I’ve revived you in as many days.”

“It hit me so hard,” Eduardo said. At that point he’d been using heroin off and on, mostly on, for 30 years. “But I’d never OD-ed before. I realized I don’t want to die this way.”

Thankfully, he knew where to go for help – to the same people who had been feeding and caring for him for years: The Salvation Army. 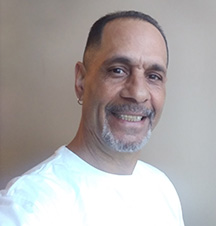 During Eduardo’s 30-year addiction to heroin, he spent 10 years living on the streets. During that time, he got many of his meals from The Salvation Army’s Mobile Outreach Unit. This truck makes 25 stops around Chicago every day providing warm soup, a cold beverage, and an offer to connect these clients to the Army’s various long-term assistance programs.

“Those meals meant everything,” Eduardo said. “When you’re in addiction, you hardly eat. You’re not concentrating on food.” He credits the meals he got from the Mobile Outreach team with keeping him fed, and alive.

The winter before the pandemic struck was especially cold and it hit Eduardo hard. “I’ve never been so desperate in my life,” he said. As is often the case with individuals battling homelessness and addiction, the cold drove Eduardo back to rehab. After detox, he landed at a shelter run by the City of Chicago, not knowing that a new challenge was right around the corner.

COVID-19 brought many new realities, including new social distancing standards. Homeless shelters suddenly had to decrease their number of beds, and a few local Salvation Army facilities took on some of the healthy overflow. Eduardo was part of that migration, suddenly finding himself living on a cot in the gym at the Army’s Freedom Center.

Like the shelters the men had come from, this temporary shelter was open, meaning the residents could come and go at certain hours. Taking advantage of this freedom, Eduardo eventually began frequenting the drug dealers along nearby Chicago Avenue. At the same time, he also got to know the people staffing this shelter, most of them graduates of the Harbor Light inpatient substance abuse treatment and rehabilitation program housed in the same building, men who had fought the addiction Eduardo was succumbing to once again.

Laying on his assigned cot in the Freedom Center gym, he had plenty of time to think about the life choices that had led him to living in a gym in the middle of a global pandemic. “I was really lonely and depressed,” he said. “My family didn’t associate with me. Then I OD-ed three days in a row. I hit rock, rock bottom. It was different this time.”

Eduardo finally asked to go into the Harbor Light program. He was ready to make a change.

Eduardo has now been clean for seven months, for which he credits the Harbor Light program and what he calls his own “spiritual recovery.” “I’m so determined to stay clean, so focused on my higher power,” he said. “I’ve had a taste of seven months clean and it’s beautiful. I wouldn’t trade it for anything.”

During this time, he’s been living in one of the residence rooms at the Harbor Light facility and working housekeeping in the building. He recently volunteered with the Mobile Outreach Feeding Unit passing out soup. “It was so eye-opening to see where I’ve been and to think about where I am now,” he said.

Eduardo’s focus now is staying clean for the rest of his life and helping other addicts. His dream would be to get a job working for the Mobile Outreach Team, offering hope to men living tough realities he knows all too well. “I would tell them, if God can save Eduardo, he can save anyone!”