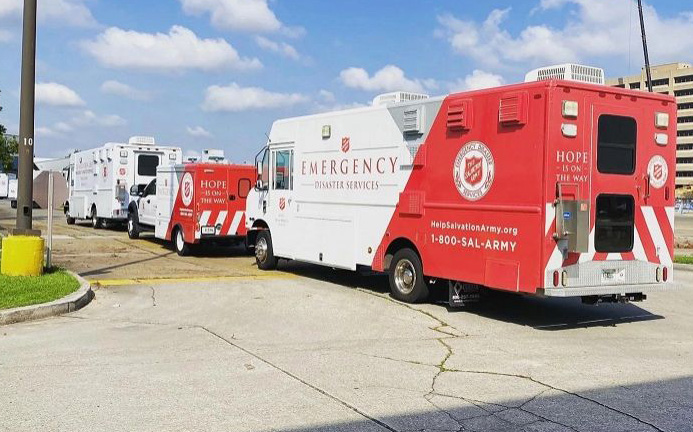 Hurricane Ian made landfall as a Category 4 storm the night of Wednesday, Sept. 28, on the west coast of Florida. Main concerns include a heavy storm surge leading to severe flooding conditions along the coastline. With the entire state of Florida now under a state of emergency and about 1 million residents planning to evacuate ahead of landfall, The Salvation Army is positioning resources and personnel to respond to widespread need as efficiently as possible.

"We have mobile feeding units and disaster response teams along the Florida coast," said Major Todd Hawks, Community Relations and Development secretary for The Salvation Army's USA Southern Territory. "With the public's generous support, we will be able to serve this community for as long as we are needed."

On the second front of the recent explosion of hurricane activity, The Salvation Army is continuing to meet the needs of Hurricane Fiona survivors and first responders in Puerto Rico by providing a wide range of emergency services. Many of the communities being served are the same ones who have been dealing with the aftermath of Hurricane Maria which made landfall five years ago.

"Disaster relief is always about the long game," said Bob Myers, Emergency Disaster Services director for The Salvation Army's USA Eastern Territory. "It's about helping people to get their houses and their communities rebuilt. It's also about providing long-term emotional and spiritual care to disaster survivors as much as we can, because sometimes the recovery on the inside can be harder than the recovery on the outside."

The Salvation Army has as many as 37 canteens (mobile feeding units) and one field kitchen ready to mobilize across the impacted area immediately after the worst effects of the storm are realized.

Additional services and items provided at some Salvation Army community centers include:

The Salvation Army disaster personnel are also collaborating with federal, state, and local emergency management agencies and other social services organizations in both locations to monitor ongoing impacts and adapt response efforts, if necessary.

To make a financial gift to support Hurricane relief efforts:

One hundred percent of designated disaster donations go to direct services for survivors and first responders.