They say the apple doesn’t fall far from the tree, and in the case of the Amick family, this rings true. To honor Father’s Day, we wanted to recognize a father and son, Lieutenant Colonel Dick and Andy Amick, who strengthened their faith by assisting The Salvation Army… and loving a good game of basketball. 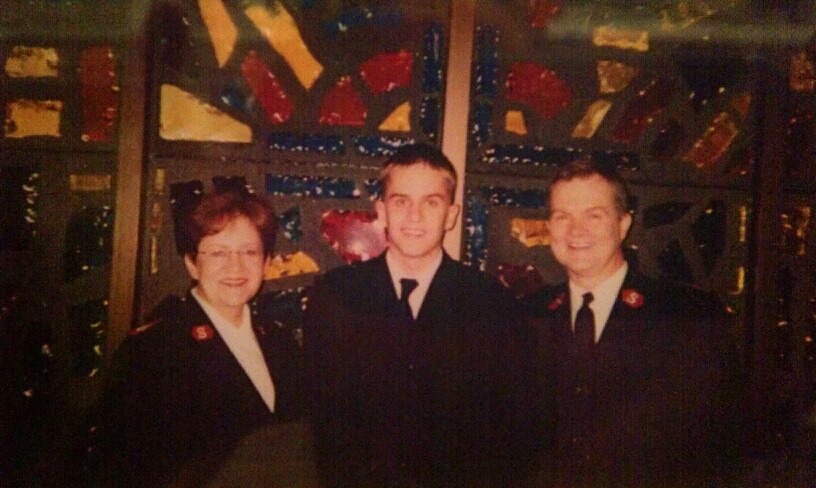 “My father was a very active officer,” he explains. “It did not matter how intense a person’s tragedy was, he was there.” It was hard for young Dick to understand why his father made time for everyone else.

That was until a Sunday afternoon when his father was taking a nap between services. 14-year-old Dick went out to play basketball, right next to his father’s room. Out of spite, he tossed the ball up and hit the window’s glass to wake his father. Dick was ready to be punished, but his father wanted nothing of it. Instead, he wanted to play basketball.

“I don’t remember who won but do I remember thinking, “I just disobeyed my father, and he’s still there for me… My dad, at that moment, led me to the Lord.”

When Lt. Col. Dick was a high school senior he played on the school basketball team. His coach required each player to serve volunteer hours. Because of Dick’s relationship with The Salvation Army, he decided to deliver food baskets.

“We went into the basement of a home,” he says. “The conditions were indescribable. I never imagined such poverty right in my backyard. From that moment, I knew that whatever I wanted to do, I wanted it to be about others.”

As he grew, so did his appreciation for his father’s work, which he had once resented. He went to seminary, where he met his wife, Lt. Col. Vicki. They were moved to an inner-city church near Chicago, which is where they had their son, Andy.

“The people there didn’t have much, but their faith was like a skyscraper,” he says. “I believe Andy soaked up that love of helping there.” As Andy grew, Lt. Col. Dick always tried to make family time. 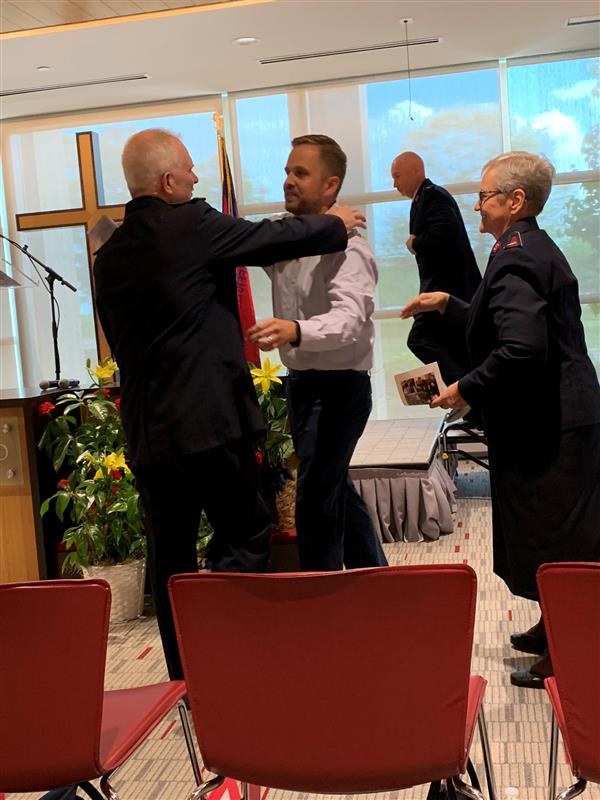 “I tried my best with my son. He had a love for basketball as I did, so we played often. I would always shoot from the 3-point line,” he says. “But as Andy grew and I got older, I started taking steps in. When he was in tenth grade, he beat me in a game. I realized the torch had been passed.”

However, Andy still felt confused as to why a lot of his father’s time was devoted to other people. Being a child of an officer, he had a hard time settling in after moving so frequently.

“Moving is hard,” Andy shared. “I lived in three states by the time I was in second grade.” Like his father’s experience, Andy wasn’t aware of the impact of The Salvation Army’s work until he was older. “Because my parents weren’t on the frontlines, I was numb to what The Salvation Army was doing,” Andy explains. “Never seeing the work made it easy for me to resent it.”

At the age of 25, poor decisions had begun to creep in. Andy got a job waiting tables, but his faith was broken. Two local officers approached Andy, asking if he would be interested in using their gym to play basketball. It wasn’t long before he was working at the corps, assisting with summer programming. This marked the beginning of Andy’s spiritual journey.

“That’s where I found my love for The Salvation Army,” he explains. “God showed me that I didn’t have to be anything special for Him to use me. I just had to be true to who I was.”

Today, Andy currently serves as Donor Relations Director at The Salvation Army’s Indiana Divisional Headquarters. He and his wife, Holly, are raising two girls together. He’s proud of the work he has been able to do for the organization and as a dad.

“I get to work with people who have the means to make a difference. I feel like I can best represent the organization because of my passion,” he says. “Because of The Salvation Army’s footprint in our family, my girls know the work we do. They have this amazing sensitivity for helping others.”

Lt. Col. Dick is enjoying retirement and spending time with his granddaughters. “God has never left me, and He’s always taken care of us,” Lt. Col. Dick shares. “I don’t know where we’ll be in years to come, but I’m very grateful for what God has provided.” 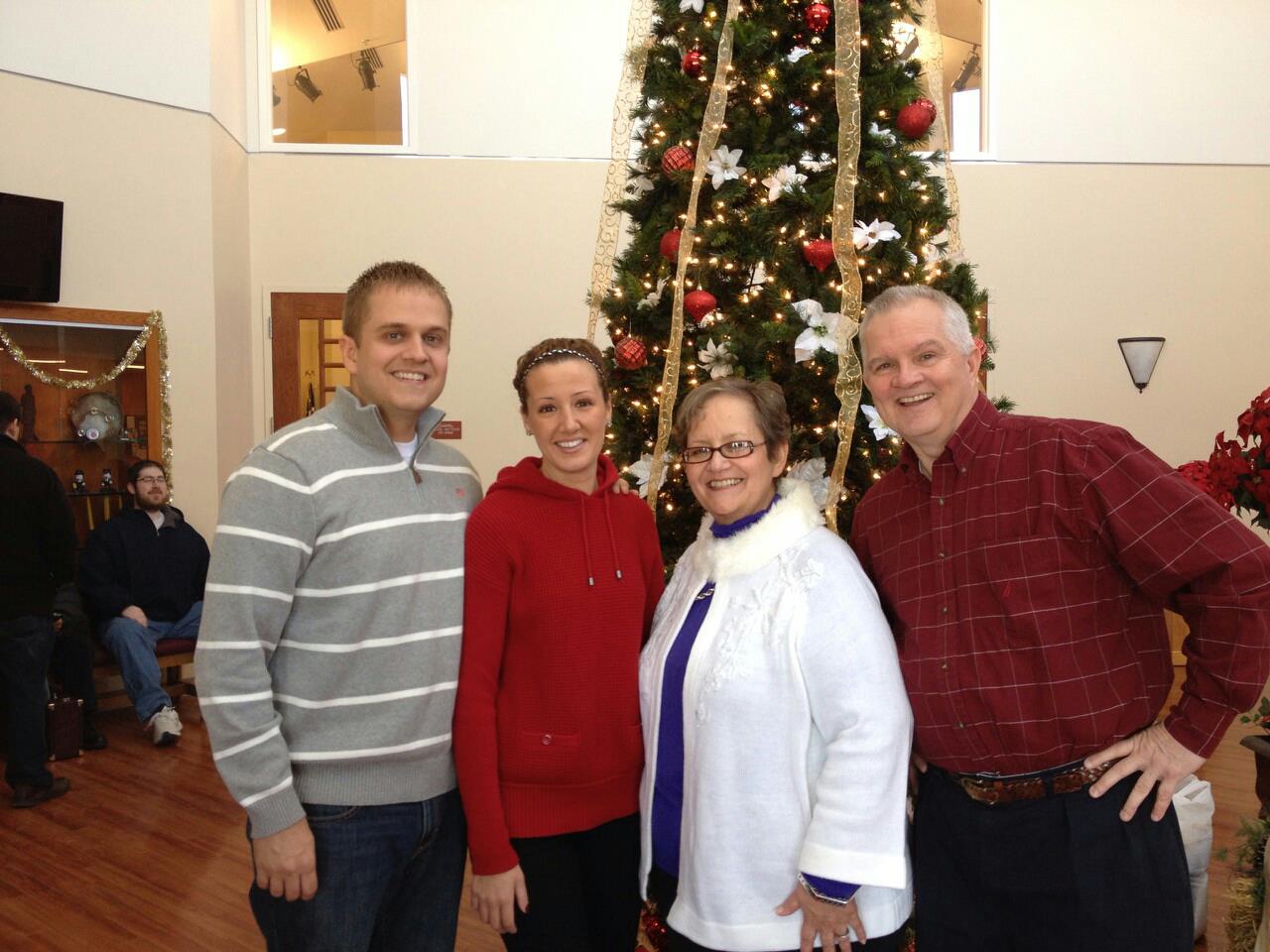