A Sacred Responsibility: An Officer Remembers 9/11

Major David Dalberg, director of The Salvation Army Metropolitan Division Emergency Disaster Services (with his wife, Major Debra Dalberg), worked at Ground Zero for many months following the 9/11 tragedy. As we commemorate the 20th anniversary of that difficult day this weekend, we share Major Dalberg’s reflections and, in the midst of the devastation, glimpses of grace.

On September 11, 2001, my wife and I were serving as national disaster service coordinators. When I reflect on that time, I think about the numbers. I’m not referring to the over 3 million meals served by The Salvation Army or the eight months and 19 days of 24/7 service at Ground Zero, the medical examiner’s office, and Staten Island landfill. The numbers that rush to my mind are 2,749 civilians, 343 firefighters, and 87 Port Authority personnel who died; only 20 people were recovered alive. 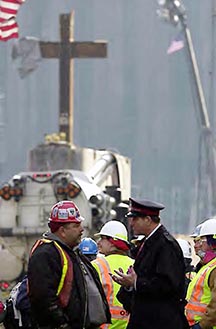 I reflect on retired firefighter Bill Butler who was one of 12 firefighters who lost a son on 9/11. From day one until the middle of February, Bill came to “the pit” to dig for his son’s remains. The 35,000-square-foot soft-sided tent became his second home, and we became family. Bill described The Salvation Army’s volunteers as “angels of mercy and grace.” 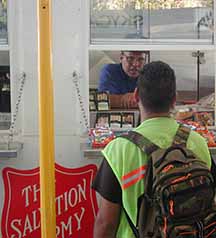 I remember a specific challenge with the New York City Restaurant Association which felt The Salvation Army was taking business away from their members. After considerable negotiation, we agreed to purchase 5,000 meals a day from area restaurants, and the Restaurant Revitalization Program was established. Just before the closing of Ground Zero, more than 60 restaurant owners came to thank The Salvation Army for saving their businesses.

I remember Rosemary Cain, a volunteer whose son was lost on 9/11. In the midst of her grief and pain she wanted to do something in his remembrance, so she daily served firefighters, not only feeding them but listening intently to their experiences and struggles, and drawing personal strength from their relentless determination. 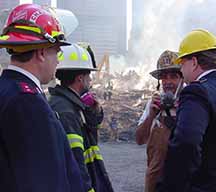 My primary responsibility for eight-plus months was to coordinate Salvation Army leadership personnel from across the United States and Canada. After the first couple of weeks I would fly home on Friday evening and return on Sunday afternoon. During the week I would evaluate our 24/7 operation and negotiate with the territories the best persons to fill positions for the next rotation. A sacred part of my responsibility was to identify and secure the right person for the ceremony of releasing identified remains to families with dignity and respect.

After several weeks, canteens serving at Ground Zero were replaced by makeshift facilities at each end of the pit. One cold Monday morning in late February as I got into the vehicle transporting me to the site, I wondered, “Will this ever be over?” As we arrived at the first shack on the northside, a Canadian officer greeted me with a huge smile. Intrigued, I asked, “What’s making you so happy this morning?” He pointed to a lawn chair and said, “That chair is making me happy this morning.” Concerned, I replied, “Tell me why that chair is making you happy.”

He shared that 45 minutes earlier one of the guys working in the pit came in for his regular morning visit and said, “I’m ready.” “Ready for what?” the officer asked. The worker responded, “I’m ready to accept Jesus into my heart.” That lawn chair became an altar.

On May 30, 2002, I was honored to be one of 10 Salvation Army representatives who attended the ceremony officially closing Ground Zero. As I stood at attention alongside other Salvation Army officers, I understood for the first time that our God-ordained mission for this horrific event was complete. I was deeply honored to represent the hundreds of other officers who had given servanthood ministry during those challenging days.