The Salvation Army in Aurora officially started the 2019 Christmas fundraising season on November 7 with their 4th Annual Red Kettle Kick Off at the historic Paramount Theatre in downtown Aurora. As Aurora corps officers Captains Linnea and Rich Forney led those gathered in looking forward to a successful bell-ringing season, they also invited them to look back at the bravery and service of one of Aurora’s own: Ortencia Watkins.

Watkins served as a Donut Lassie during World War I, one of approximately 250 other Salvation Army volunteers who made and delivered donuts to soldiers on the front lines. While The Salvation Army was present during World War I to offer spiritual care to American soldiers, the donuts were seen as a way to bring a taste of home and comfort to the soldiers. 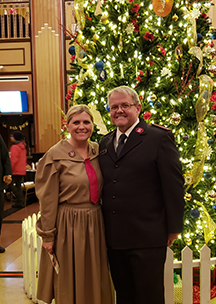 Watkins came to the attention of the Captains Forney when they recently discovered an original medal commemorating her service as they were cleaning out the Aurora corps’ storage. The discovery led them to The Salvation Army Central Territory’s museum, where they met museum director Nanci Gasiel. They asked her to research Ortencia and share her findings as the guest speaker at the Red Kettle Kick Off.

Born in 1893, Ortencia was a 25-year-old dressmaker and fashion designer living in Chicago when she answered an ad by The Salvation Army for War Service Workers to go the frontlines to serve and encourage the troops. “Their duties included operating huts or hutments (today known as canteens) which provided a home away from home for the enlisted men, nursing care in triage centers, spiritual support, and counseling,” Gasiel shared. Though these huts offered the innocuous services of baked goods and beverages, live music, letter-writing supplies, uniform mending service, and religious services, they were often located in harm’s way and put the young women at risk.

Ortencia set out for her war service on the steamer Chicago on November 7, 1918 – exactly 101 years ago to the day of the Red Kettle Kick Off Event! Though the Armistice was signed before Ortencia landed in France, there was still much to do in post-war Europe. She served in huts in at least two different cities in France before receiving a new appointment in Germany. 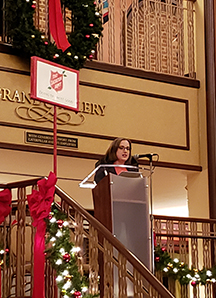 When she finally returned home on July 24, 1919, Gasiel shared that Ortencia “was sent on a speaking tour to promote The Salvation Army’s work overseas and to help raise funds for domestic projects” – not so unlike the red kettle fundraising campaign being kicked off in Aurora to support the life-changing work the Army still performs in service of the hungry, homeless, addicted, and impoverished.

In addition to the introduction to Ortencia Watkins, the kick off included members of the Roosevelt Aurora American Legion Post #84 presenting the flags for the evening and Jr. Soldier Adrian Caro singing the national anthem.

Alderman Patty Smith shared how she always keeps extra money in her car this time of year to put in the kettles and told Army staff and volunteers, “On behalf of the city, thanks for making us what we are today.” Deputy Mayor Chuck Nelson shared his own bell-ringing stories, including the time he (nervously) had to take a kettle full of donations home for the night. Advisory Board Chair Forrest White reminded those present that the Army has been serving Aurora for more than 130 years and shared that last year’s red kettle donations provided, among other things, Christmas assistance for 1,000 families.

Captains Forney honored their corporate partners – Aldi, the Paramount Theater, and Alderman Carl Franco – and recognized other partners in service, including Aurora Kiwanis, Central States SER, Old Navy Outlet, Ashley Lloyd, Accurate Auto Body, and Mission Church. After the ceremonial drop of the first coin in the kettle, attendees were dismissed to enjoy the many World War I exhibits on loan from the museum at the Salvation Army Central Territory.

Check out more photos from the Aurora Red Kettle Kick Off