Recent gatherings at The Salvation Army’s Des Plaines, Templo Laramie, and Aurora Corps Community Centers celebrated their members’ similarities and differences in honor of National Hispanic Heritage Month (September 15 – October 15). “We are all Hispanic, but we are all different,” said Envoy Florinelvi (Ody) Giraldo, who leads the Hispanic ministry at the Des Plaines corps with her husband, Envoy Alberto.

They and the leaders at the Aurora and Templo Laramie corps sought to celebrate and achieve their dual goal with music, food, dancing, national costumes, much pride, and a few surprises. 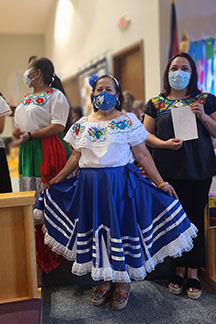 The Des Plaines Hispanic ministry regularly draws people from Guatemala, Colombia, El Salvador, Dominican Republic, Cuba, Puerto Rico, Mexico, and Venezuela. They celebrated Hispanic Heritage Month on September 19, when members of their congregation were encouraged to wear their national dress, which they got to display in a parade. They enjoyed native dance performances, learned about each other’s cultures, and even crowned a multicultural queen.

“This was a time not only to celebrate, but also to educate our members on various groups' histories and contributions to American History,” said Envoy Ody, who is originally from Guatemala. She said this annual celebration reminds her of her childhood in Guatemala, when they would walk with flags in front of her school and enjoy special music to celebrate their culture.

“This is an important time that helps us to understand some of our own cultures and identities, as well as others. Every country has their own food, colors, traditions, but in Christ we are ONE, we are united,” Envoy Ody said. “This is the meaning of this activity, to share with one another and share the love of God.” 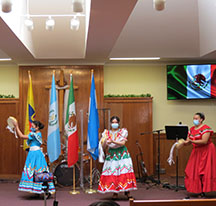 One of the speakers at the Templo Laramie celebration might have come as a surprise. Fred Sullivan, a Caucasian member of the congregation “gave his testimony and shared that despite the fact that he is the minority in our corps, the reason why he is attending is because he feels welcomed and loved by our congregation, which is mainly Hispanic,” said Captain Tomas Valladares, who leads the Templo Laramie corps with his wife, Captain Martha.

In addition to the Sunday morning celebration when Fred spoke, the corps also had a family night the previous Friday evening, when members of the corps were invited to wear their national costume, bring a dish from their home country or state, and play games.

The Templo Laramie corps, which is located in Cicero, includes people from Argentina, Chile, Ecuador, El Salvador, Guatemala, Puerto Rico, Mexico, and the United States. “For Captain Martha and me, it is very important to teach our corps members how important it is to feel included and valued because God has created us very special and each one of us has something to contribute for His kingdom,” said Captain Tomas. 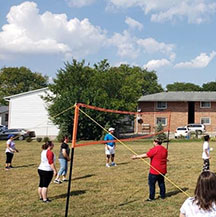 The celebration at the Aurora corps included national decorations, regional dress, food, pinatas, and one tradition unique to the Aurora congregation: a volleyball game.

Majors Gaby and Joaquin Rangel, who lead the Aurora corps, highlighted the importance of intentional inclusion. “We want to open up to other ethnic groups and celebrate each other's cultural background,” Major Gaby said. Those groups include members from Mexico, Bolivia, Puerto Rico, and the U.S.

“I was born in Mexico and migrated with my parents at the age of 11 to the U.S. My husband was born in Mexico and came to the U.S. at the age of 25,” Major Gaby said. “We both know the need to belong and the importance of inclusion in order to thrive.” After the past couple years these communities have experienced, coming together in unity and celebration did indeed feel like thriving.

See more photos from these celebrations