Fostering Bright Futures in a Neighborhood Known for Violence

Mention Englewood to most people familiar with this southside Chicago neighborhood and one thought comes to mind: violence. Englewood regularly ranks in the top three of Chicago’s 77 neighborhoods when it comes to violent crime. This, in a city known nationally for its skyrocketing crime rate.

But when you look at the lives of several young people involved in The Salvation Army Red Shield Center in Englewood, a new word emerges: promise.

“The question is always asked, ‘Can anything good come out of Englewood?’” said Captain Corey Hughes, who served as the corps officer at the Red Shield Center for the past eight years. “My answer to that question are the names of these young people and several others.”

The “young people” he’s referring to include Gabriel Johnson, who earned a full scholarship to Trinity Christian College this fall, Jatavia Forney, who earned an academic scholarship to study nursing at Lincoln College, and George Walker, who was drafted to play for the ABA Rosarito Tropics basketball team.

All of them say the time they spent attending services, leading worship, volunteering, playing basketball, and, most importantly, interacting with the officers, staff, and volunteers at the Red Shield Center helped prepare them for this exciting next chapter in their lives.

How to Be a Man 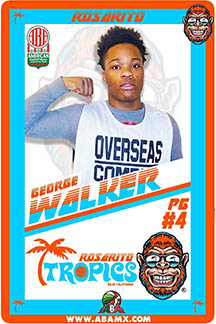 “They absolutely prepared me for what’s next,” said George, who started playing basketball when he was 3. George credits his success to workouts at the Red Shield Center gym, their help getting him a trainer, and the fact that several officers and staff “showed me how to be a man.” George said, “I lost my dad at a young age. Having those men help me meant a lot.”

A Mighty Man of God 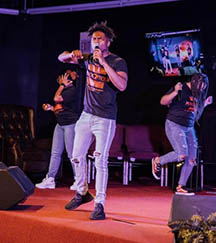 Gabriel started leading worship at the Wednesday night youth gatherings at the Red Shield Center once Captain Corey learned he plays drums and has a passion for connecting young people to God through music. “I’m able to be myself there,” Gabriel said of the Red Shield Center. “They influenced not just my music but becoming a leader and being responsible. Mentoring me.”

“I have known Gabriel for about four years now and Gabriel has grown to be a mighty man of God,” said Theo Coleman, a former staff member and regular volunteer with the Red Shield Center youth. “He is a Christian concert promoter, and he also enjoys leading worship and encouraging young people in Christ. I look forward to seeing great things from him in the future.” 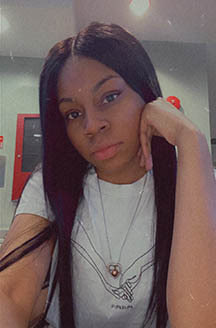 Jatavia is deeply involved in the Red Shield Center, attending church, doing power point for services, attending Wednesday youth gatherings, supervising the children, and working the cash register at the gym. She also credits the officers and staff with helping prepare her for a hopeful future. “They motivate us, saying don’t give up, keep going, don’t let the negative impact you, stay focused,” Jatavia said. “We’re family. They understand what we go through. You can go to them if you don’t have someone in your corner.”

“In the past seven years I have seen Jatavia grow from a little girl coming to Sunday School classes into a young woman with goals and aspirations,” said Theo. “I've seen her go through the pain of losing loved ones to violence on the streets. I will miss her and look forward to God doing great things through her.”

A Legacy of Support

Jatavia hopes to work in a hospital after college. Gabriel wants to start a business, a place where young people can explore their creativity through music and art. And George wants to take care of his family, hopefully also reaching out to other young men and encouraging them the way those at the Red Shield Center encouraged him. It seems fitting that all three want to help others, carrying on the legacy of support that was instilled in each of them.

As Captain Corey, Theo Coleman, and the rest of the Red Shield Center team watch them go, they look forward to seeing how they write their life stories – and how they collectively help change the narrative about their home neighborhood.