Going the Extra Mile for a Single Mom and Her Son

Last Christmas, Latrice wasn’t sure she’d be able to afford gifts for Josiah, her then-6-year-old son. Thankfully, she knew exactly where to turn: The Salvation Army.

Her mom had told her about the help they could provide about a year prior, when Latrice says she was “in a hard place. I needed an ear to listen.” She found that support in a woman she refers to as “Miss G,” known to others as Marilyn Gonzalez, the emergency assistance case worker at The Salvation Army’s Mayfair Community Church. 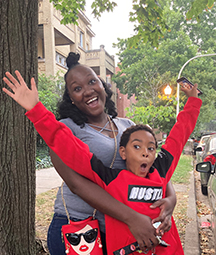 Marilyn offered emotional support and helped Latrice get some much-needed furniture. When Latrice returned for help last Christmas, Marilyn secured presents for both mother and son through the Adopt-a-Family program.

While the gifts – a makeup kit for Latrice and some toy trucks for Josiah – were much appreciated, she was almost more impressed by what was outside the presents – beautiful, careful wrapping. “They were wrapped so neatly!” she said.

“Nobody had to help me, but someone came along, went to the store, bought some gifts, and wrapped them up so nice,” she said. “I truly appreciate it. I’m blessed.”

Latrice was just as impressed when Marilyn and the rest of the Mayfair church didn’t just meet her immediate need, they helped her address her financial struggles. They signed Latrice up for the Army’s Pathway of Hope program, which works with clients to set and achieve goals toward financial self-sufficiency.

Marilyn worked with Latrice to evaluate her spending habits and create a budget. “I didn’t think watching my little daily spending habits would make a difference, but it did,” Latrice said. “I learned I need to stop spending so much on restaurant food. I’m still working on that, but I’m better.”

Latrice also set a goal to secure an apartment for herself and her son, a goal she met earlier this year. “All thanks to Miss G,” she said. “I wouldn’t be where I’m at if not for Miss G and her prayers and The Salvation Army and their prayers. I’m so grateful.”