It’s a common problem. Shelters for homeless individuals often struggle with bed bugs, an unfortunate fact that prevents some from trading life on the streets for the comfort of a roof over their head.

The Salvation Army’s Evangeline Booth Lodge was no exception to this common struggle. “Some of our children even had bites on their faces,” said Carol Randolph, the director of Booth Lodge. Her property manager told her it’s always been a problem at the facility and that they’d done all they could to address it.

That answer wasn’t good enough for Carol. “I want the same for the families at the Lodge as I would for my own family,” she said. “And I wouldn’t want them to have to deal with bed bugs.”

The Root of the Problem 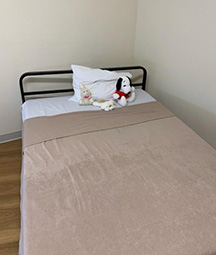 Carol hired an exterminator to help figure out the source of the bugs. He brought in dogs to sniff out the bed bugs and discovered they were in more than half of the resident rooms. The study also discovered that the bugs were living in the beds, dressers, and other wood furniture in the rooms. The exterminator told staff that the bugs can travel between rooms via the electrical outlets. Tackling this job was going to be a major undertaking.

Booth Lodge staff realized they needed to replace nearly all the furniture in the shelter, trading all the wood pieces for metal. They also needed to replace all carpeting with vinyl wood plank flooring. And while they had everything torn up, they might as well repaint the walls as well. The building, originally a Holiday Inn, had been erected in the 1950s. Though the Army has renovated the facility multiple times since converting it to a homeless shelter in the 1970s, this would be one of the biggest projects to date.

The Salvation Army made a commitment out of capital for these renovations, deciding also to redesign the intake area with a better front desk, showers for brand-new residents, and offices to meet with these incoming clients. “As one of the largest family shelters in the city of Chicago, we knew having a quality facility was important,” Carol said.

This sense of responsibility to the city and her homeless community had already led Booth Lodge staff to expand programming over the past year. They added mandatory adult classes on parenting, budgeting, mental health, and other pertinent topics, all aimed at helping residents become more self-sufficient. 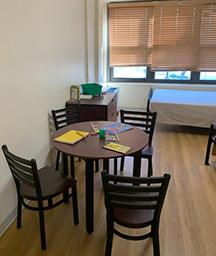 The building renovations started in February of 2020, just before the pandemic struck. While they established strict safety protocols for their residents and increased cleaning throughout the facility, they soldiered on with the renovations.

The city of Chicago, which works closely with The Salvation Army to serve homeless individuals, gave the Army funds to purchase new beds and linens for Booth Lodge. In addition to the new beds, each residential room would get a new mattress, dresser, round table, and chairs. Renovations also included the cafeteria and a new heating and cooling system.

Staff limited intake during the renovation to keep capacity down. Workers renovated 16 rooms at a time, then another batch of families would relocate to the improved rooms. Some residents slept on cots for a brief time during parts of the work. “I assured them the end result would make it worth the inconvenience,” Carol said. “And we kept clients informed every step of the way.”

The exterminator sprayed before and during the project, and everyone’s temperatures were taken often. After all the renovation was done, the new furniture was delivered and assembled.

“My priority was to make the rooms family-friendly and comfortable,” Carol said. “They should be nice.” Now that all the work is done, she is thrilled with the result. She’s also thrilled that they accomplished their other main priority: “I’m happy to say Booth Lodge is bed bug-free!”

They hope to have an open house next year to show off the improvements to this important facility. In the meantime, staff prepare for a new influx of residents, those for whom the financial challenges of COVID-19 have made it impossible to pay their bills and stay in their home. Booth Lodge will be more than ready to offer them a quality place to get back on their feet.

Help the Salvation Army Do the Most Good