Loving Those in Crisis for More than 40 Years

Gail Daniels has been working at The Salvation Army’s Evangeline Booth Lodge longer than many of their clients have been alive. She still remembers her start date: November 17, 1977. Back then, Jimmy Carter was the U.S. President, Gail’s youngest child was five years old, and she took the job in housekeeping to earn a little extra income for herself and her kids.

Gail is now the overnight shift monitor, a grandma, and 71 years old. One thing hasn’t changed over the past 43 years: Gail still loves her job.

“I just love coming to work,” she said. “I love the people. I love my staff. I love helping people.” Those people include individuals and families who have suddenly become homeless due to eviction, disaster, domestic violence, or another crisis. They find temporary housing at Booth Lodge, usually staying two to three months or until they can secure permanent living arrangements.

Despite the joy she receives from working at Booth Lodge, Gail admits she’ll retire sooner or later. “I won’t die here,” she said with a laugh. 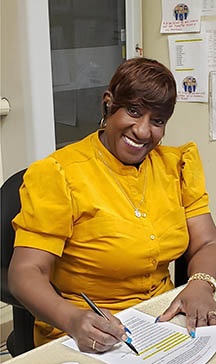 For now, Gail enjoys welcoming new clients to the shelter and making the hourly rounds to ensure the building and residents are secure. She also offers needed perspective to the residents, telling them, “This is a stepping stone. You will leave here with an apartment or rental house if you follow the rules and the program.”

Though Gail is quick to show love to the residents, she also expects them to respect the staff and regulations. She makes sure the residents don’t loiter in the nearby bus stop and reminds them not to leave trash at the park across the street. “Many of our neighbors don’t want us here, let’s not give them an excuse to try to get rid of us,” she tells them.

When the residents get disruptive or upset about the consequences of breaking a rule, she does her best to defuse the situation. “We don’t know how much they’ve been through before coming here,” she said. “If people get belligerent, I try to let it fly over my head. I can handle it. God’s got my back.”

Knowing that some clients are hurting and don’t want to be at the shelter, Gail encourages them, “You have to look at like this: You’re here for a time. You have your own room, three meals a day, your kids have activities, you can do laundry, and you don’t have to pay for anything. If I couldn’t be in my own home, I’d rather be here than sleeping in a car or living on the street.” She encourages the residents to look on their time at Booth Lodge as “just a little boost in life.”

Though a few of the stories end tragically, Gail loves hearing from former Booth Lodge residents who are now successfully in a job and a home. Sometimes she’ll run into them at the store and they’ll say, “Remember me? You helped me!”

One former resident called recently to thank the woman she always called “Miss Gail.” She reported that she’s now been a bus driver for 20 years and her son and daughter are both grown and successfully employed. “You helped me physically and spiritually,” the woman told her. “That’s the most pleasure I get,” Gail said.

After working with people struggling with homelessness for more than 40 years, Gail knows well the misconceptions about her residents. “I feel some people think homeless people are indigent, disruptive, and troublemakers. That's not true. Most follow the rules,” she said. “Overall, there are good people who want to do what’s right.”

Gail also knows what it’s like to be one paycheck away from homelessness, which bolsters her compassion for the residents. “I don’t look down on anyone. They’re all right beside me. God made us all equals,” she said. “I’m just trying to live the life He gave me.”

For more than four decades that life has included loving on people in crisis. What does she enjoy most about her work? “The fact that we get to help people,” she said. “I love them – the families, the babies. I love them because they’re people and we should love them. It’s what God calls us to do.”