Salvation Army National Commander, Commissioner David Hudson, finished his three-city “Fight for Good Tour” in Chicago with visits to the Army’s Shield of Hope and Freedom Center facilities on September 18. The tour, which also included stops in Los Angeles and Atlanta, was designed to highlight the unique ways The Salvation Army is addressing homelessness and other needs specific to each community. 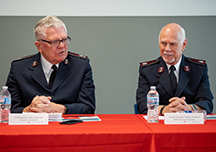 The Chicago visit commenced with a roundtable discussion at Shield of Hope, the emergency homeless assessment and response center the Army built in 2018 in partnership with the City of Chicago. Commissioner Hudson discussed the realities of homelessness in Chicago with city officials Alisa Rodriguez, the Deputy Commissioner of Homeless Programs, and Jonathan Ernst, Managing Deputy Commissioner, both from the city’s Department of Family and Support Services, as well as Sabrina Kiser, the Assistant Director of Social Services and Public Policy Coordinator at the Army’s national headquarters. The Army’s Chicago Metropolitan Division was represented by Commissioners Barry and Sue Swanson, Major Kjell Steinsland, Majors Merrill and Nancy Powers, Divisional Social Services Director Leon Denton, and Shield of Hope Director Andrea Chatman. Colonel Steve Howard offered perspective from the Central Territory.

The group talked about the need for shelters that allow family units to stay together, which the Shield of Hope does, as well as the importance of partnerships to tackle the complex issues of homelessness. “There’s a level of trust between the City and the Army,” said Commissioner Barry Swanson. “This is a very important partnership.” Rodriguez heartily agreed, adding that the City regularly gathers partners, including The Salvation Army, to discuss and learn from each other. “As we learn lessons, we apply them,” she said. Her colleague Ernst praised the breadth of the Army’s programming. “We offer services from the cradle to the grave. Of 360 agencies we partner with, only a handful cover all the areas we do; The Salvation Army is one of those.”

After the roundtable discussion, the party toured the Shield of Hope facility, which served more than 4,300 people in its first year alone, then walked down the street to the Freedom Center. This facility houses three key programs: Pathway Forward, a federally funded halfway house for people returning to the community after incarceration; Harbor Light, an inpatient and outpatient treatment program for substance use disorders; and a corps community center, housing an on-site food pantry, after-school programming, and the home base for a mobile feeding unit that makes 25 stops throughout Chicago every day.

The Majors Powers, directors of the Freedom Center, gave the group a tour, during which they heard from several staff members, including employment specialists who mentioned that one of the biggest barriers to sobriety is employment. Major Nancy Powers noted that their neighborhood, West Humboldt Park, is the number-one area of opioid use in the nation, underscoring the great need for their facility. Several people who have been helped by Harbor Light talked with the group, including Nathan, a 50-year-old who has been in a penitentiary four times but has now found sobriety and a better life with help from the Army. “They want the best for you,” he said of Army staff and volunteers.

Commissioner Hudson praised the “incredible, comprehensive programs” at the Freedom Center. “It would be easier to list the things they don’t do,” he said. “To beat homelessness or addiction, a person needs three things: a safe place to live, productive work, and community.” He noted that the Shield of Hope and Freedom Center are great examples of the Army’s work to provide all three.

Following lunch at the Freedom Center, the group went to a mobile feeding unit stop, where Army staff and volunteers were passing out lunch as well as Narcan, a medication used to treat an opioid overdose. After chatting with clients and volunteers at the site, Commissioner Hudson declared the work, “Phenomenal. I’m beyond words.”