“This is a big deal for these kids,” said DeShawn Johnson, Community Center Director at the Red Shield Center. “This makes something like the Bears and pro athletes accessible. It’s a great opportunity to go behind the scenes and have some fun.” 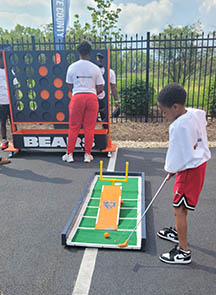 For 17-year-old Jabari, throwing the football with his friends was his favorite part of the day. Eleven-year-old Dejania enjoyed getting her face painted. But for most of the kids, nothing could compete with watching the players practice, especially with hot new quarterback Justin Fields participating. Nine-year-old Kaidyn explained why watching the team practice was his favorite: “They’re famous. They’re on TV!” 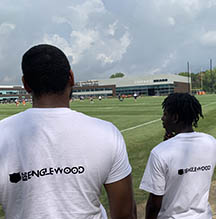 Lamar Bruce, who has been coaching basketball at the Red Shield Center for the past seven years, could tell the kids, some of his players and sons among them, were having a great time. “This is a great thing,” he said. “It’s extremely exciting to have them here.”

“Sports takes these kids outside the neighborhood,” DeShawn said, explaining that many of the youth don’t leave Englewood except to watch or play sports. Several from their youth program earned sports scholarships or got drafted to play for the ABA this fall, proving that sports can take them outside the neighborhood long term as well.

Still, DeShawn explained that for some of the kids from the violence-prone neighborhood, the value of an experience like this is more profound. “For some of these kids, this is another safe day,” he said.

At the end of the day, it was clear the Chicago Bears have a few more loyal fans. Walking toward the bus that would take him back to the Red Shield Center, 9-year-old Kaidyn clutched his new bobble head in his hands and said, “The Bears are my favorite football team!”