Officials from the Chicago Department of Aviation and Chicago Fire Department asked EDS to participate, as though it were a true emergency. EDS responded with seven vehicles, and prepared and served meals, snacks, and hydration to first responders and survivors during the exercise. Chaplains were on-site to offer emotional and spiritual support services as requested. 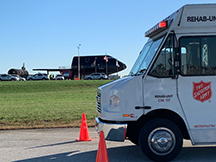 The exercise fulfilled a requirement from the FAA for O’Hare to test its emergency plan every three years. A similar full-scale exercise was conducted at Chicago Midway International Airport last year.

Captains Rich and Linnea Forney, corps officers at The Salvation Army Aurora Corps Community Center, served with EDS, and said they enjoyed the experience. “We appreciate the opportunity to fine-tune the response, and to be better prepared when called upon,” Captain Rich said. “Serving those in need is the action of carrying out our mission.” 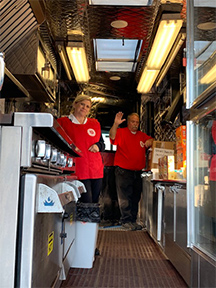 The exercise allowed EDS to test the timeliness of its response, logistical coordination, operational coordination, delivery of services, public information management, and ministry of presence.

Major David Dalberg, Disaster Services Director for The Salvation Army Metropolitan Division, said the team learned a great deal. “We met and exceeded all of our expectations in terms of points of service, including our mass feeding operation,” Major Dalberg said. “We planned for 350, and we served 500. We tested our field kitchen which performed at the highest level of expectation.” 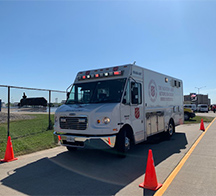 EDS assisted at the passenger gathering location, and supported the medical examiner’s team during the exercise. Major Dalberg said the group’s participation went a long way toward raising awareness of the services EDS provides.

The Salvation Army Emergency Disaster Services is prepared to immediately respond to a disaster and to assist in the long-term recovery. EDS serves more than 275,000 people in any given year. For more information on EDS, and opportunities to volunteer or donate, please visit www.salarmychicagoeds.org.