Louisville, Kentucky -- Specialized equipment and trained personnel from across The Salvation Army’s Kentucky and Tennessee Division have been activated for deployment in response to the anticipated devastation from Hurricane Dorian, a storm of historic proportion.

Representatives and equipment from both Kentucky and Tennessee have been activated for the initial wave of support, including:

Additional response equipment and personnel in both states have been placed on stand-by, along with others across the Southeastern United States, as we closely monitor Hurricane Dorian’s path.

“The Salvation Army has a long history of serving in disasters, from tornadoes and flooding to 9/11 and Katrina. Our service footprint means we have resources nearby and can pull in additional help when needed. We are where the need is, and while we can’t be sure of Dorian’s path, it is clear there is going to be need in her wake.” said Major Art Penhale, the Divisional Commander (leader) for the Kentucky/Tennessee Division of The Salvation Army.

Salvation Army personnel work closely with local, state, and federal officials to ensure resources and services are focused where needed most. Those departing within the next couple days are part of a network of strategically placed equipment and trained responders allowing for effective and efficient response in times of disaster.

Even as the canteens (mobile feeding units) and personnel are prepared to depart, their destination is uncertain. “The situation is changing hour-by-hour. The current projections call for hundreds of miles of coastal communities at-risk even if the eye doesn’t come ashore,” said Bo Sells, the Disaster Services Coordinator for Kentucky and Tennessee. “We know we are deploying, but not sure if we are heading to Florida, Georgia, or the Carolinas.”

Nassua, The Bahamas (September 1, 2019) - Majors Clarence and Karen Ingram, The Salvation Army officers in charge of operations in the Bahamas, have reported the following information about the current and future impact of Hurricane Dorian.

The major impact for the storm is the northern islands of the Bahamas.  As much as possible, and as much as the residents were willing, the government has evacuated those in low-lying areas prone to flooding and those with less well-built houses.

The Salvation Army Freeport Corps is currently the main base for Salvation Army operations on Grand Bahama.  They are not a shelter, but since they have good kitchen facilities their immediate role is to provide food for those in shelters.  The initial request was for 300 meals a day, but they are prepared for that much and more.  It looks like the hurricane will be over them about 2 days so it may be Tuesday before the all clear is given.

The Salvation Army also has a corps on Eleuthera island and the Corps Sargeant Major there has prepared it for a shelter even though conditions in that area are not forecast to be as severe.  The last word received from there is that they have lost electricity. It is to be expected that it will be difficult to reach the islands affected for several days after the storm so The Salvation Army may be asked to continue to provide meals well beyond the all clear.

The Salvation Army’s main role will be to aid after the storm has passed. Majors Ingram will wait for specific information and requests from NEMA so that they can follow through accordingly.

Based on video footage on the news and social media of the severe flooding that has happened already, The Salvation Army anticipates there will be a need for food, clothing, tarps, cleanup kits, etc.  At this point The Salvation Army is ready to provide assistance as soon as the needs are accessed.

Commissioner Devon Haughton, Territorial Commander is encouraging Salvation Army personnel throughout the Caribbean to give attention to those most vulnerable in their communities, and where possible make Salvation Army facilities available for shelter, support and practical assistance.

Financial donations are the best way to meet the evolving needs and to support relief efforts. The Salvation Army asks those who want to help the individuals and families affected by disaster to visit www.HelpSalvationArmy.org or call 1-800-SAL-ARMY and designate “Hurricane Dorian.” Monetary donations will ensure The Salvation Army can meet the most immediate needs of those impacted. 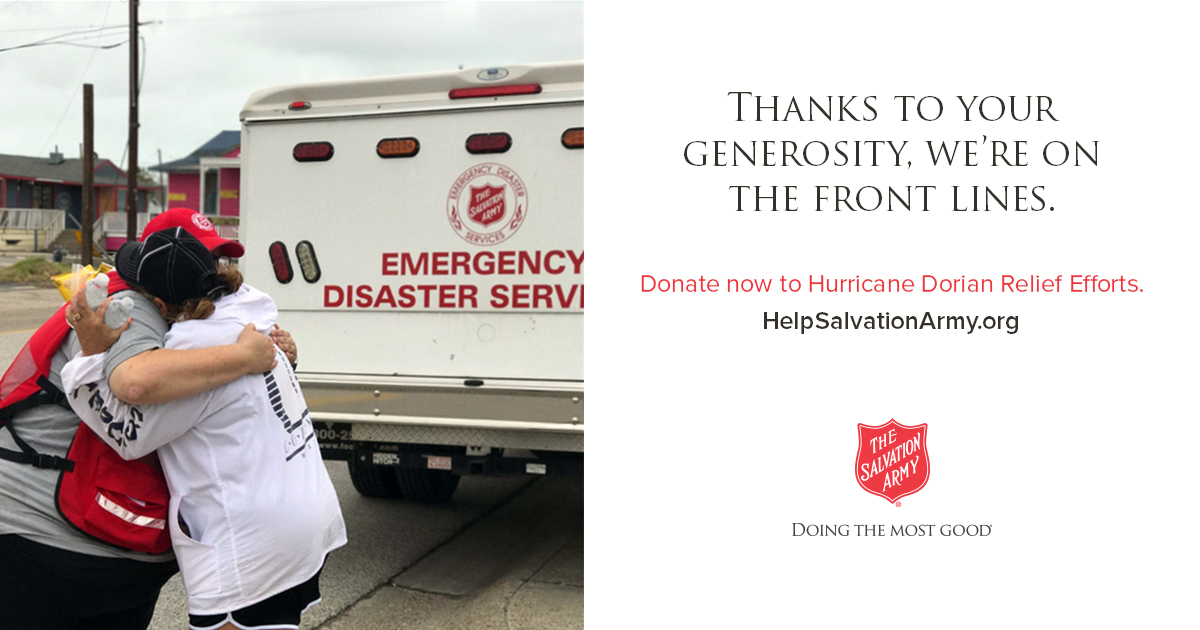 To make a financial gift to support Hurricane Dorian relief:

Designate ‘2019 Hurricane – Dorian’ on all checks