Serving Others on Their Worst Day

Several key events have turned our attention to Emergency Disaster Services (EDS) this September. Hurricane Dorian and widespread flooding in the Midwest left thousands of people in need of emergency rescue and relief. In addition, September is National Preparedness Month and the time when we host a volunteer appreciation dinner, celebrating Salvation Army staff, city officials, and volunteers who make the Metropolitan Division’s EDS department so robust.

Despite the breadth of service, many people are surprised to learn that the Army is actively involved in disaster response – and has been since 1900.

The Army’s EDS efforts began with the hurricane that wiped out Galveston, Texas, in September 1900. Still considered the deadliest natural disaster in the U.S., the hurricane killed an estimated 8,500 people and destroyed more than 3,600 buildings. The National Commander at the time, Frederick Booth-Tucker, encouraged Army officers around the country to move to that part of Texas to help with the cleanup efforts and to assist with feeding, sheltering, and attending to the emotional and spiritual needs of the thousands of survivors.

In the decades that followed, the Army offered relief to those impacted by the San Francisco earthquake, the sinking of the Titanic, and World War II. Salvation Army National Commander Eva Booth advocated for Army staff and volunteers to go to the front lines in Europe to encourage the troops, paving the way for the relief efforts that would birth the Donut Lassies and, eventually, the USO. 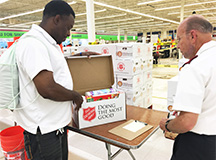 More recently, the Army responded to the 9/11 national tragedy, where they offered 24/7 relief from 45 minutes after the first plane hit to June 23 the following year. Major David Dalberg, current head of the Metropolitan Division’s EDS team, was then leading the Army’s EDS efforts nationally. Immediately deployed to Ground Zero, he oversaw the Army’s effort to feed 5,000 first responders, FBI officers, medical examiners, and others on the scene every day.

He said the daily gathering place offered responders an opportunity to connect with one another, and for Army staff to minister to them. “It was a horrific experience,” Major Dalberg said. But one with many opportunities to provide hope. Whenever officials identified a new victim in the rubble, an Army officer was always present when they released the information or remains to the family. “They had a powerful impact.”

Now in the Metropolitan Division, Major Dalberg heads an impressive response team serving the city of Chicago and 12 surrounding counties with eight employees and an army of volunteers. The team operates out of a 60,000-square-foot headquarters in Elk Grove Village, which includes 48,000 square feet of warehouse space to store emergency supplies, including 90,000 bottles of water, 5,000 blankets and hundreds of flood cleanup kits, or as Major Dalberg likes to call them, “kits full of hope.”

Their fleet of response vehicles includes 11 mobile feeding units and an urban kitchen, which houses four convection ovens, two microwaves, a double-door fridge and a double-door freezer, all capable of preparing 20,000 meals a day. These resources allow the Army to respond at a moment’s notice, like when the Army was suddenly cleared to provide meals to TSA workers at both Chicago airports during the government shutdown early this year. Many of these workers live paycheck to paycheck and were really struggling after weeks of not getting paid. 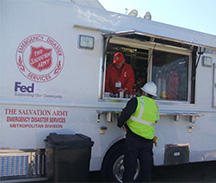 The EDS team participates in 14 active-shooter exercises a year at large public venues like the United Center and Soldier Field. And they recently participated in a full-scale disaster drill at O’Hare Airport, all part of the ongoing effort to keep them prepared to serve the more than 275,000 people they help in any given year.

But the impressive numbers aren’t what drives Major Dalberg and his team. “Being present in people’s lives on their worst day is a sacred responsibility,” he said. It’s that attention to each individual that sets the Army’s relief efforts apart, he says.

The Metropolitan Division’s EDS team is currently finalizing an agreement with the City of Chicago to provide chaplaincy support to the City’s Office of Emergency Management, which would enable Army staff and volunteers to provide emotional and spiritual support to 911 operators, police officers, and other first responders who perform essential but stressful jobs.

“The biggest thing isn’t what you say, it’s the ability to listen to their pain or anger. That brings comfort,” Major Dalberg said. “What we want to convey is hope, period.”