The Blessing of Two Sparkly Backpacks 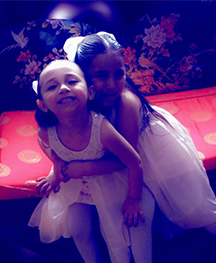 When Dora, a single mom of three children, recently came home with matching sequined backpacks, she was a hero to her two daughters. And she had a stranger to thank for it.

Dora received the free backpacks – and an abundance of supplies to fill them – at The Salvation Army’s Joliet Corps Community Center, through their Back to School Carnival. She took her 9-year-old son, Angelo, who enjoyed picking out his own supplies.

As soon as Dora spotted the pair of sparkly purple and gold backpacks, she knew they’d be perfect for her daughters, 5-year-old Alexandra and 4-year-old Angelina. As expected, they squealed with delight when they saw them.

“Apparently when the lady dropped them off she said that if she had two young girls, this is what she’d buy for them,” Dora said. “It’s like she read my mind. They’re just what I needed. My youngest now wants to carry hers everywhere.” And since the bags are the same, the girls won’t fight over them, Dora noted. 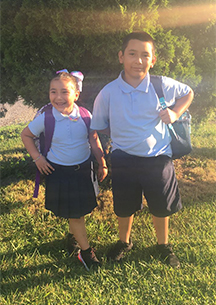 The woman who donated the sparkly bags did so at the Army’s Stuff the Bus event on August 3. The Salvation Army teamed up with Walmart for this national event, and collected school supplies at Walmart stores across the country. Salvation Army corps are distributing these supplies to families in need as a part of our back-to-school activities.

For Dora, this bit of back-to-school help is a godsend. When her three children start school this fall, so will she. She’s going back to school to become a counselor so she can help people struggling with drug and alcohol use disorder – the fulfillment of a long-held dream.

While it’s an exciting time for all four of them, it’s also a financial struggle. As a single mom, Dora can only work part time so she can care for her children. And she recently totaled her car, an accident that did more than $2,000 worth of damage to her car.

“I was already behind on bills when that happened,” Dora said. Sending her three children back to school isn’t cheap either. She’s had to buy three school uniforms, get her children all the required doctor’s exams and purchase a long list of supplies provided by the school. 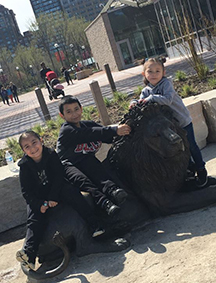 Prompted by budget cuts, more and more schools today are requiring students to bring more than just paper, pencils and notebooks. Many are asking parents to also provide paint smocks, paper towels, ziplock bags, baby wipes and trash bags. All of those items and more were on Dora’s back-to-school shopping list this year. “They’re asking a lot,” she said. “It all adds up!”

So when she learned that her local Salvation Army was offering free school supplies, she was thrilled. “Receiving these items saved me a lot of money – as well as the time it takes to go buy everything. It can be a big hassle.”

Dora first got involved with The Salvation Army at the Joliet corps’ Halloween party several years ago. Her family went dressed as the Incredibles. Due to recent hardships, Dora went back to the corps to receive help through the Army’s Pathway of Hope ministry. Corps officer Captain Wendy Faundez is now in regular contact with Dora, offering her financial and spiritual guidance.

As Dora is learning how to budget and manage her finances, these school supplies are a big help. And if she ever ran into the woman who donated the sparkly backpacks? “I’d say thank you so much. I appreciate it!”