This National Volunteer Month, we celebrate the work of our valued volunteers, like Julia.

Here’s just a partial list of the things Julia Vasquez did for The Salvation Army La Villita Corps Community Center: oversee the food pantry, help with garage sales, supervise the after-school program, clean and organize the kitchen, answer the phones, welcome visitors at the front door, assemble food boxes, make breakfast for the Red Kettle bell ringers, deliver food boxes. It would be easier to list the things she didn’t do for the corps. 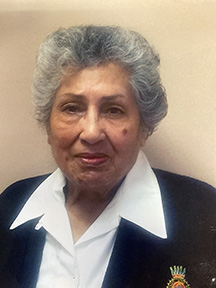 And no, the La Villita corps wasn’t Julia’s workplace. It was much more like her home. Julia volunteered at La Villita from the time it opened in 2003 until just months before she passed away last December at the age of 91. Her death has left a big hole in the community.

Perhaps no one feels that void as much as Silvia Galan, the office administrator at the La Villita corps. For years, Silvia gave Julia rides to and from the corps on the two to three days a week she would volunteer there. When she did office work, Julia sat at a desk just feet from Silvia’s. And when Julia’s health began fading, Silvia took her to doctor’s appointments and delivered meals to her home, becoming her primary caregiver. “She wasn’t just a volunteer,” Silvia said. “She was my friend.”

Carlos Moran, who leads the La Villita corps with his wife Kerman, has fond memories of Julia as well. “I began my tenure at La Villita in July 2006, and Julia was already here volunteering,” he said. “I remember seeing her doing dishes, cleaning the kitchen, carrying bags, bringing me food to the office.” In fact, Julia took it upon herself to make sure that Carlos had coffee and the staff was well-fed, often making lunch for them on the days she volunteered.

Both Carlos and Silvia remember Julia as someone more comfortable behind the scenes, but willing to do anything to help. A behind-the-scenes moment with Julia is one of Carlos’ favorite memories of her. “When my wife was diagnosed with breast cancer in 2016, Julia was always asking after her,” he said. “Her words of encouragement meant a lot because of what she had been through.”

Julia was a breast cancer survivor herself and had also survived a brain tumor and severe stomach issues that required surgeries. Silvia was amazed by Julia’s strength. She even told her once, “If the Lord lets me a live a long life, Julia, one day I want to be as strong as you.” 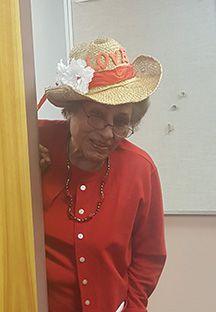 Knowing all she’d been through made the joy Julia exuded all the more meaningful. “She was always happy,” Carlos said. “I felt encouraged whenever I was around her.”

When the pandemic hit, Julia’s strength and tenacity made her reluctant to stay home. She missed serving and seeing her La Villita corps community. “We were her family,” Silvia said. “Her life was here; this was everything for her. She loved the Army.”

Silvia visited Julia at home as much as she could, often taking over meals she or others at the corps had made for her, especially toward the end when it was clear her health was failing. “Everyone knew her,” she said. “We all loved her.”

Carlos and his wife, Kerman, visited her at home as well. On their last visit, Carlos said Julia brightened when she saw them and squeezed his hand. She passed two days later.

“I will keep a good memory of her,” Silvia said. “She was really something.”