The “7T” scribbled in grease pencil on the windshield of a Ford Explorer in the parking lot of an old Circuit City in Rockford tells you a lot about how COVID-19 has impacted the city.

It’s 6:15 on a Saturday morning and seven cars have already lined up for the pop-up food pantry that will start here at 9:00 a.m. Volunteers have already chatted with these early arrivals and jotted the appropriate code on each windshield. The 7T on the Explorer means the driver is picking up food for seven families and wants the groceries placed in his trunk (versus his backseat).

That seven explains it all – both the unprecedented need and the generosity to match. Seven families depending on food pantries such as this one, run by The Salvation Army Rockford in partnership with the Rockford and Winnebago County government, to keep food on their table. And one kind soul willing to sit in his car for hours on a frigid Saturday morning to make sure his neighbors in need receive this assistance. 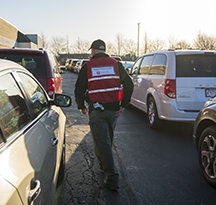 Dan, one of the early arrivals, is picking up boxes of food for both he and his wife as well as five other families they know of in need. Dan is retired and his wife, who works for DCFS, went months without work due to COVID-19. They both got the virus as well.

“We live on a tight income, and for a while we didn’t have any money,” Dan said, adding that food pantries such as this one “help immensely.” Before attending any of these pantries he checks on his family, friends, and neighbors, offering to collect food for those who can’t get out. Sometimes he’s gotten food for as many as nine different households. “This is a godsend for us,” he said.

A few cars back, David is here because of his father-in-law, who plays Santa every year for a group of shut-ins. “He said it would be nice if someone helped them,” David said, adding that he decided to be that someone. He’s here to collect food for four families who can’t get out, one of them a woman who had been so desperate she was eating cat food. “This helps a lot,” David said. “You have to share the love.” 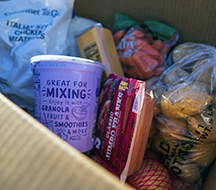 Once the food pantry opens, each car drives around the corner of the building, where dozens of volunteers are waiting to load them up with boxes containing a gallon of milk, frozen meatballs, a block of cheese, a bag of apples, a container of vanilla yogurt, baby carrots, and other food provided by the Northern Illinois Food Bank. Each car is also offered a big bag of dog food left over from a pop-up pet food pantry a few weeks ago.

The man in charge of this impressive operation is Jacob Heiser, Operations Manager for The Salvation Army’s 16 facilities throughout Rockford. He’s been here since 4:00 a.m. The semi full of food arrived at 5:00 a.m. The first car pulled into the lot at 6:00 a.m. Jacob has arrived at previous pantries and found cars already in line, people asleep inside. Sometimes it’s clear that they live in their cars. “They’re worried they won’t get what they need,” Jacob said. “It speaks to the desperation.”

This is about the tenth pop-up pantry the Army has hosted since the pandemic first started impacting the public a year ago. These pantries are part of a larger partnership between The Salvation Army and the Rockford and Winnebago County governments, and are in addition to the food pantry at the Rockford/Winnebago County Social Service Center every Monday through Friday. The most recent pop-up food pantry drew about 800 cars, all lined up for this lifesaving help.

Coming Together to Serve 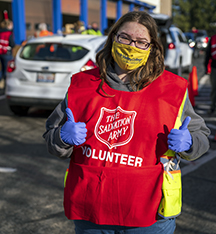 Having enough volunteers to man these pantries has proven challenging. The Army’s usual volunteers skew older, many of them retirees using their extra free time to help others. Unfortunately, that group is especially vulnerable to COVID-19, wiping out much of Jacob’s volunteer force. So, Nancy Jenkins, Development Director for The Salvation Army Rockford, reached out to other organizations, such as Rockford Sharefest and local churches.

As a result, the volunteers working the pop-up pantries represent various organizations and congregations throughout the area, just as the pantries themselves are a cooperation of several local groups – all a true testament to Rockford’s giving spirit.

One of the volunteers at today’s pantry is Judy. She is volunteering in honor of her 20th birthday tomorrow and has recruited seven friends to volunteer with her. “I’m big on community service,” she said. “I like to help out, and to get my friends involved.”

One of the early arrivers, a woman getting food for herself and her son, is grateful for people like Judy and organizations like The Salvation Army. She recently retired but hasn’t started receiving Social Security yet. “It’s a struggle right now. Without this help, we would have to borrow money and not get all our bills paid,” she said. “It’s wonderful to have all these volunteers here and this extra help.”