We are an organization dedicated to Doing the Most Good in your community.

The Salvation Army is made up of thousands of officers, soldiers, adherents, employees, volunteers and other individuals all working together to holistically meet the spiritual, emotional and physical needs of those less fortunate. Our organization is a nonprofit, tax-exempt charitable organization under Section 501(c)(3) of the Internal Revenue Code. Donations are tax-deductible as allowed by law. The Salvation Army Metropolitan Division is the administrative unit which provides services to people in need in Greater Chicago, Northern Illinois and Northwestern Indiana.

Mission Statement
The Salvation Army, an international movement, is an evangelical part of the universal Christian church. Its message is based on the Bible. Its ministry is motivated by the love of God. Its mission is to preach the gospel of Jesus Christ and to meet human needs in His name without discrimination.

Vision Statement
The Salvation Army is a fully equipped and empowered Army of Christ’s followers passionately and effectively engaged in holistic ministries that are restoring people spiritually, emotionally and physically.

What We Do & How We Help
People often ask why The Salvation Army offers so many different services and programs. The programs and services differ in order to meet the unique needs of the people in the communities we serve. We take a holistic approach to Doing the Most Good where there is the most need without discrimination, whether it be disaster relief, emergency assistance, substance abuse rehabilitation, or educational programs for children. To learn more about The Salvation Army Metropolitan Division, you may review our most recent Annual Report. You can discover the global legacy of The Salvation Army at story.salvationarmy.org.

If you find yourself in need — whether that need be practical, recreational, spiritual or emotional — we hope you will seek our assistance.

With a presence in nearly every zip code in America, there is a local Salvation Army near you. There are 28 Corps Community Centers within the Metropolitan Division. To find The Salvation Army in your community, type in your zip code in our location search tool here.

The Salvation Army is led by officers – ordained ministers – who supervise the many programs and services provided in your area. They also serve as administrators, counselors and youth leaders. 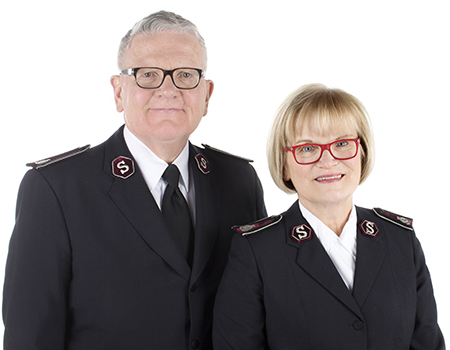 Commissioners Barry C. Swanson and Sue Swanson are Divisional Commander and Director of Women’s Ministries respectively for The Salvation Army Metropolitan Division. The Swansons have held numerous territorial, national and international appointments, including Chief of Staff and World President of Women's Ministries. For more than 40 years, the Swansons have served as officers in The Salvation Army, sharing their leadership experience, vision and ministry. They are supported by numerous officers, dedicated staff, and board members.

The Chicago Advisory Board is comprised of community and business leaders dedicated to helping The Salvation Army fulfill its mission of serving our most vulnerable neighbors throughout the greater Chicagoland area. Members serve in an advisory capacity, helping the Army deliver its services in and the most caring and efficient manner possible.

The Salvation Army Echelon seeks to mobilize the next generation for The Salvation Army by providing opportunities for young adults to engage with the organization through volunteerism, fundraising and advocacy among other young professionals.

Discover ways to support The Salvation Army on our Ways to Give page.

If you are interested in a career within The Salvation Army, visit our Careers website to view current job opportunities.

To find ways to volunteer and support your community, view our regional volunteer locations, or contact our Volunteer Resources Office.

Our Social Services department can be reached at 773-205-3520 or email us. Someone will contact you within 24 hours, Monday - Friday, 9am - 4pm. Messages received during the weekend will be returned on the first business day. You can also search for services in your community here.

Send Us An Email

For all other inquiries, please complete the form below.