A Man of His Word

Bob Dole was at home in the halls of the Capitol Building in Washington D.C. On a daily basis, he rubbed elbows with fellow senators, Representatives, White House officials, and multiple Presidents during his more than a quarter-century serving the state of Kansas.

Like every politician, Dole frequently returned to his home, the Sunflower state, where he rubbed elbows with everyone from farmers to CEOs and even those as far removed from the halls of government as you could get.

During one of his trips back to the Kansas City area during the early 1980’s, then-Senator Dole spent his lunch hour, not with the powerful movers and shakers of the political scene, but instead enjoying the same free lunch served at the Beacon of Hope Café at The Salvation Army’s Eastside corps, then known as Bellefontaine.

The Divisional Commander at the time, then-Major Clarence Harvey, accompanied Senator Dole to lunch. The two leaders served together on President Ronald Reagan’s Hunger Task Force and the trip was as much a fact-finding mission as it was lunchtime.

“He wanted to get the facts about homelessness and hunger straight from the people,” Lt. Colonel Harvey said. Just like today, the Beacon of Hope Café served a free, daily lunch to the community, and Senator Dole found a wealth of first-hand information to draw upon for research.

“He interviewed a lot of people because he wanted to get the facts straight.” 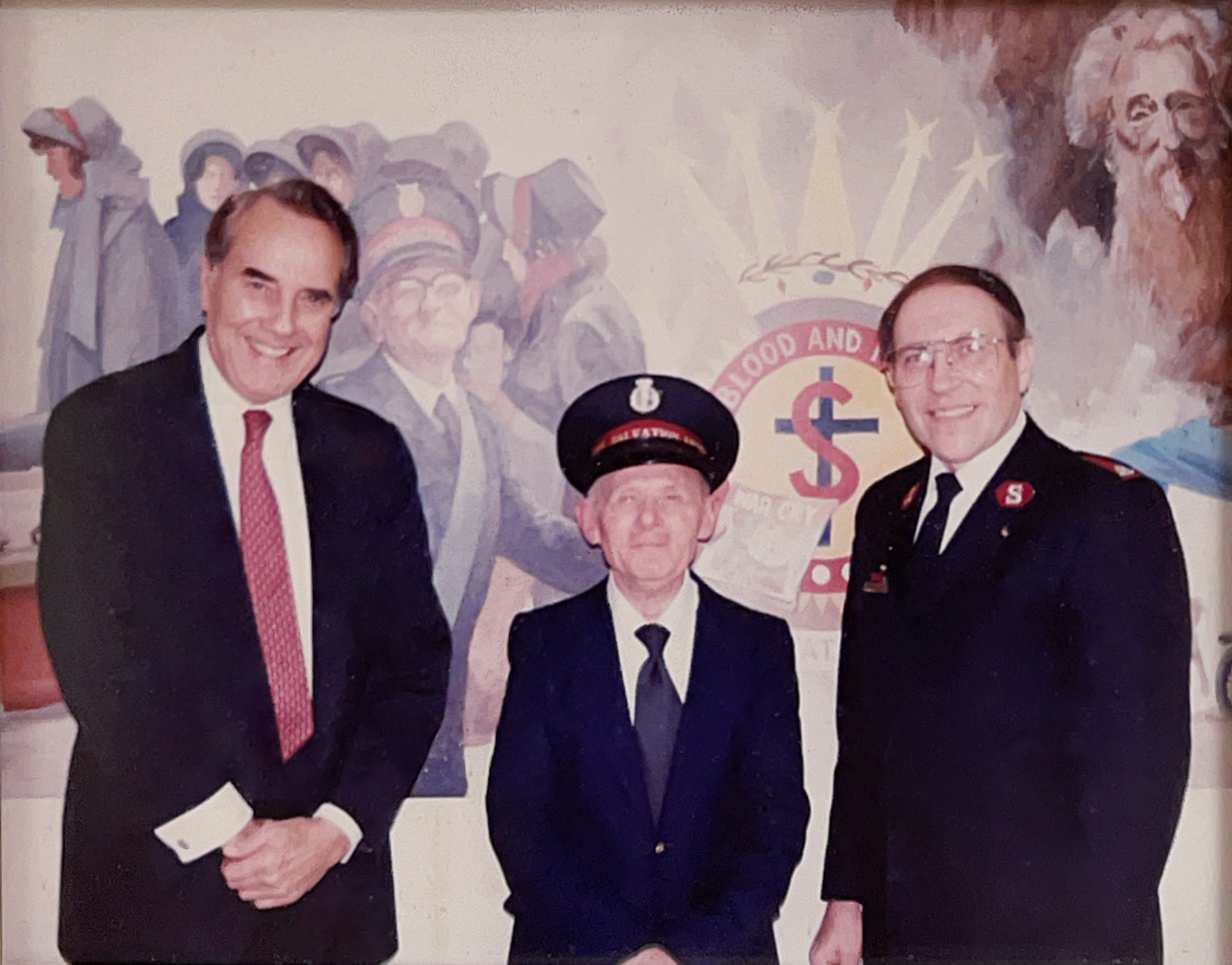 Senator Bob Dole (L) poses with Major Donald Hickey (R) and a third gentleman in front of a mural featuring
the history of The Salvation Army at the Kansas City, Kan. Citadel corps in this undated photo.

“Elizabeth and I both know the difference The Salvation Army makes in the lives of those in need,” he said during prepared remarks.

Dole also couldn’t help poking holes in his own ego, “I am honored to receive this award. I don’t know what I did to deserve it. But I’ll certainly keep it.” 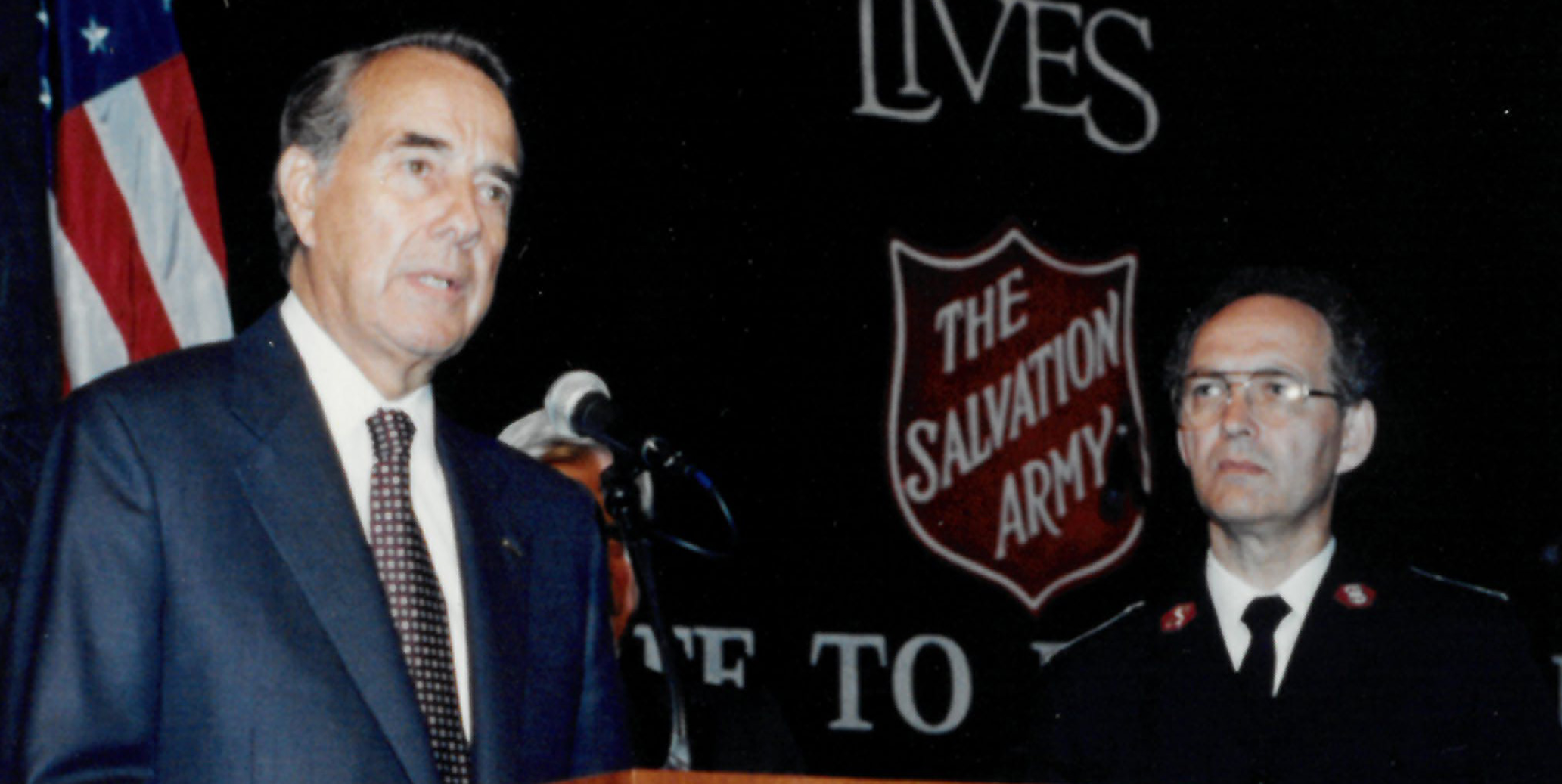 Senator Dole speaks after receiving the Others Award at the 1994 Philadelphia Salvation Army Kick-Off Dinner
while Lt. Colonel Todd Bassett looks on.
Image courtesy of the Robert and Elizabeth Dole Archive and Special Collections, Dole Institute of Politics.

Senator Dole continued working to build better lives for people in Kansas, Philadelphia, and the rest of the country, no matter where he was, often working hand-in-hand with The Salvation Army

Lt. Colonel Harvey reconnected with Dole upon receiving a new assignment to National Headquarters in Washington.

“He was a very, very committed guy. I always knew him as one who you can rely upon his word,” Lt. Col. Harvey said. “I worked with a lot of government people and a majority of them would make promises and never follow up. I thought he was a man of integrity who would follow up.”

Bob Dole built a career of following up, making sure he continued to touch lives even after leaving the Senate and elected office.

Today, The Salvation Army salutes and honors his service to both the state of Kansas and the entire country.