More Than a Game

Officer Michael Green and coach Bruce Brooks Jr. had a problem. Their team of eight, un-signed high school senior basketball players had one last shot to earn offers to play college ball. The two coaches just needed a place for the team to practice.

However, finding an available gym during the pandemic in the spring of 2020 was proving extremely challenging. “Most every place was shut down,” Green said, “And those places that were open were completely booked or extremely expensive.”

As a Kansas City, Kan. School Resource Officer, Green is extremely familiar with the Wyandotte County community, and there was one location with a gym he thought might be available. The Salvation Army’s KCK corps community center.

Green took his lunch break and hopped in the car to visit the corps. When he arrived, he was greeted by a familiar face, Angela Cannizzaro, the office administrator.

“She said, ‘Are you little Mikey Green?’” said the man who is no longer little nor goes by Mikey. “I realized I played baseball with her son growing up.”

After reminiscing, the two talked logistics, and quickly found an availability for the Rise and Grind Basketball Club to practice in the corps’ gym. 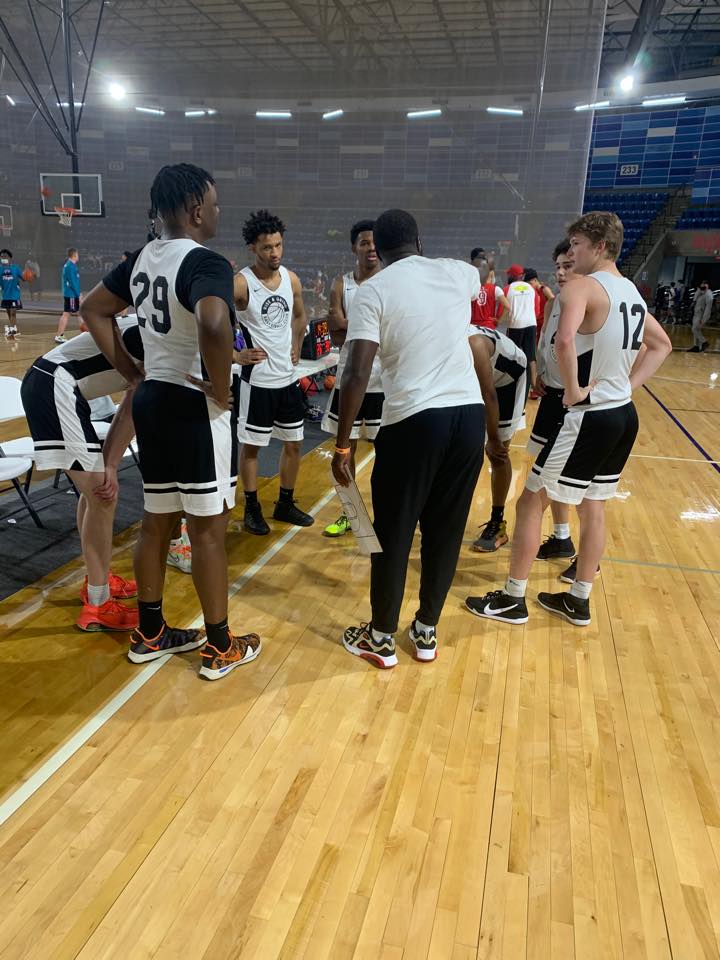 Having a place to call home proved invaluable as the team of seniors from different schools in Wyandotte and Johnson counties started practicing in March to prepare for the AAU tournament circuit. Teams from around the region and across the country will compete in multiple games over the course of a weekend, often in front of college coaches.

For many kids, it’s their best chance to land a coveted scholarship or even a walk-on offer with a college program while playing against some of the best players in the country.

For Green and Bruce’s team, it was more than that.

“It’s deeper than sports. We’re competitive, we take pride in that, but at the end of the day, our win going to come when our players walk across that stage on graduation day.”

Rise and Grind is meant to be more about what happens to its players off the court than their play on the court.

“I don’t want to be a typical youth program, I want to make an impact and prepare kids for life,” Green said. “We make kids do well in the classroom and hold them accountable.”

Part of making that impact means connecting the players and their families with services available through The Salvation Army.

“You don’t just take on a kid when you have them on your team, you take on their family, too.”

So, Green wants to partner with The Salvation Army and make sure his players’ families know the wide variety of services available through the organization: the food pantry, emergency assistance, and more.

“We’re creating the next generation of citizens, and the holistic approach is the best way to do that,” Green said. “It’s going to be in my opinion so huge, what we really want to become is an intervention program that offer sport. So many services The Salvation Army offers we want to engage with the kids and, eventually the parents.”

Rise and Grind is already talking with another sports club that works out at the KCK corps, too. KICK Ministries’ basketball teams have practiced there for several years. The most important part is the shared mission and message of all three organizations working in tandem.

In the end, Rise and Grid had its gym and time for practice and all eight seniors had their time in the spotlight on the AAU circuit. All eight found offers to continue their athletic careers at the collegiate level. Their next steps will keep them here in the Kansas City metro area and see them traveling as far as Mount Pleasant, Mich.

But as Coach Green says, Wyandotte County will always be home for the team and the players no matter where they go.

The Salvation Army’s work in the 913 is based on providing opportunities for people to excel, whether on the court or in the game of life. You can support that work with a donation today!