The Power of Lunch

When a community has hundreds of thousands of COVID vaccines to inject, as quickly as possible, especially for high-risk populations, it takes quick planning and bringing in multiple government departments to make it possible.

Mary Beverly, the Environmental Division Director Johnson County Department of Health and Environment, faced down just such a challenge late in 2020 and early-2021 as the first COVID-19 vaccines arrived in the community.

“We had people from all of Johnson County government departments teaming together,” Beverly said about the effort to turn Okun Fieldhouse in Shawnee, Kan. into the first mass-vaccination site. From clearing the parking lot to directing traffic, the effort to make the process move as smoothly as possible started when cars turned in off the street. 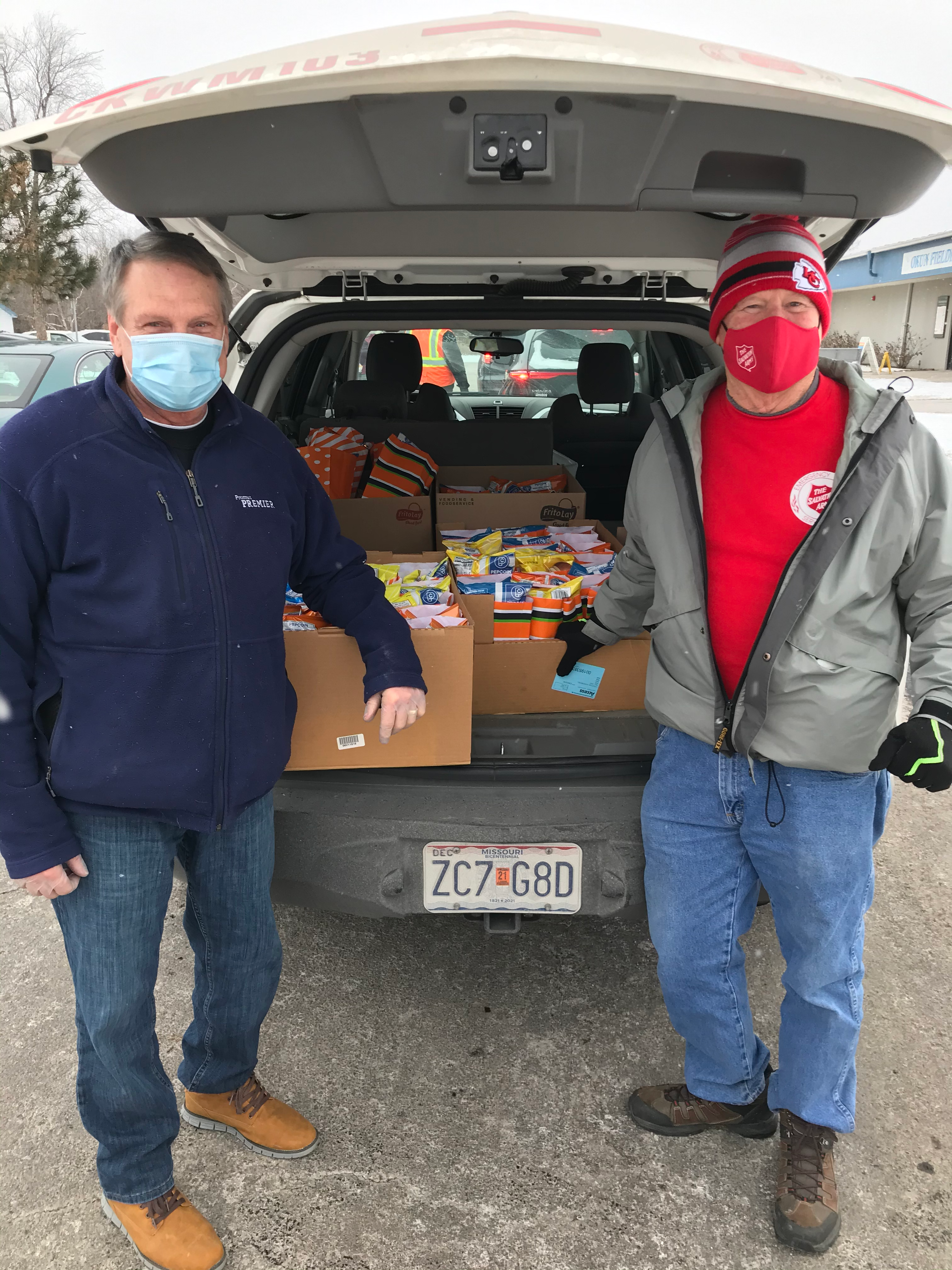 After accounting for nurses, volunteers, and other employees and all the supplies need to vaccinate for up to 12 hours a day, Beverly also realized everyone working would need food.

The task of feeding dozens of people every day was a big challenge in the race to vaccinate as many people as quickly as possible. That’s when Megan Lynch, with the Johnson County Emergency Management Department, connected Beverly with The Salvation Army’s Emergency and Disaster Services team.

“Megan told me The Salvation Army had a mobile canteen that could come in handy.” Beverly reached out to John Callahan and Steve Leiker with The Salvation Army EDS and invited them to see the logistical challenge of feeding at the vaccine site.

“We realized it was going to be a massive job for them,” EDS Director John Callahan said. “So, we started talking options. I mentioned offering a hot meal that we could serve out of the canteen in the parking lot.”

To make sure The Salvation Army and clinic workers could adhere to social distancing measures, the idea of serving a hot meal was bypassed and instead they went with sack lunches.

The idea of a sandwich may seem like a small one, but it was immediately appreciated by every worker and volunteer at the vaccine clinic.

“Everyone was really excited about getting the sack lunches,” Beverly said.

“They were very thankful,” Callahan said. “While we’re not gourmet here, we did try to mix it up and be cost effective. We had all variations of ham, turkey, and beef to keep the variety going.”

Each day, as workers and volunteers left, they would grab a prepared sack lunch on their way out the door, to enjoy the in privacy and safety of their own car.

That’s not to say the process was streamlined right from the beginning. Callahan wanted to include a piece of fruit with every lunch while following COVID protocols. That meant every item in the bag had to be wrapped or packaged. So, fruit cups were fine. Oranges, tangerines, and bananas were good to go. But fruits that didn’t come in their own “wrappers,” like apples, were out. 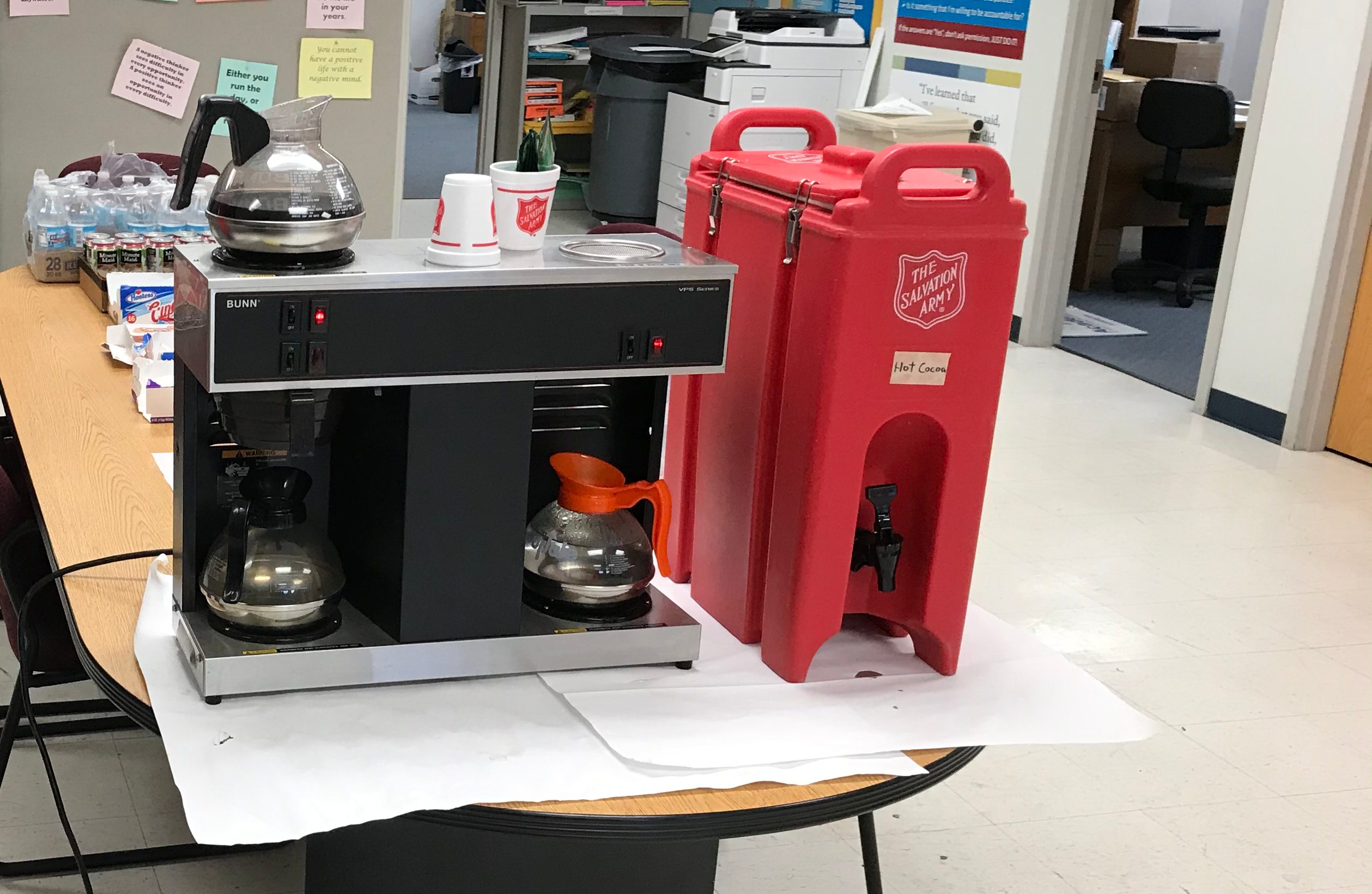 However, the biggest area where The Salvation Army helped was in taking the stress of feeding dozens of people off the plate of Mary Beverly.

“I would check with them daily, after a while I knew I didn’t need to,” Beverly said. “They were making enough sandwiches for the number of staff we had.”

After a few months, the vaccination clinic moved from Okun Fieldhouse to a new location in Lenexa, Kan. and The Salvation Army tagged along, continuing to serve lunches. In fact, the lunches were served three days a week for six months, a length of time Callahan still takes a moment to comprehend.

“It took a lot of effort on our part, we just have a staff of three, so we had to rely heavily on our volunteers,” Callahan said. “We had to go shopping all the time, so our volunteers came together, and it gave us confidence that we can do this.”

The effort is not missed by Beverly and her entire team at Johnson County.

“They were all so kind and gracious, and seemed to enjoy coming and I can’t say enough about them.”

In the end, the numbers tell the story, from January to July, The Salvation Army served three days a week at the various Johnson County vaccination sites, handing out 3,841 meals, 7,330 drinks, and 5,225 snacks. Volunteers dedicated 725 hours of their time to provide assistance when it was needed most.

This story is just one of countless ways The Salvation Army is making a difference in the 913-area code. Join the mission to support your community by donating now!