A Bike for Daniel

Every week, 90-year-old Norridge resident Daniel Godinez would grab his wheeled suitcase and head out his front door. He wasn’t going on a trip, but the journey felt just as arduous.

Over the next 25 minutes, he would wheel his suitcase along the sidewalks that led him to The Salvation Army Norridge Corps Community Center, occasionally stopping a moment to rest his legs and catch his breath. Sadly, there aren’t any benches along the route, which is just over a half mile.

Week after week, Pamela Church-Pryor, Community Ministries Director at the Norridge corps community center, watched Daniel put the groceries he received from their food pantry into his suitcase, often leaving some food behind because it wouldn’t all fit. When she overheard him saying he wished he had a three-wheel bike to transport his groceries, she knew she had to do something. 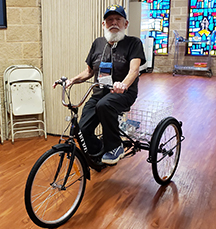 “I put it to prayer and then asked for help from the congregation here at Norridge Citadel in the CAN YOU HELP section of our Sunday bulletin,” Pamela said.

And help they did.

“Several people, who wish to remain anonymous, contributed towards the cost of the bike,” Pamela said, noting it cost about $300. “Our maintenance guy and some volunteers put it together, and we presented the bike to Daniel when he came for assistance in our food pantry.”

Daniel was speechless at first, and then became very emotional. “It was the gift of a lifetime,” he said, still emotional weeks later. “I couldn’t believe it. I still can’t!”

Prior to the gift, Daniel feared he’d have to stop going to the food pantry. “The walk was horrible on my knees,” he said. “It was just too much. One day I barely made it.”

When he saw a woman on a three-wheeled bike with a big basket one day, he knew it would make his regular trips to the food pantry easier. But he had no money for a bike; he didn’t even have enough money for food. Thankfully, God saw fit to answer his need another way.

“He pointed out that he had not asked for this, and I assured him I know,” Pamela said. “But his prayer was still answered!”

It now takes Daniel about ten minutes to ride to the food pantry, where he can fill the large basket with as much food as he needs for the week or month. “The people working there are just beautiful,” Daniel said. “I never expected such a gift. I’m beyond grateful.”