Iman Shawbekeh was distraught. While the 50-year-old mother of four had accomplished so much – relocating her family from Jordan to America in 2014, helping her children acclimate to their new country while hanging onto their culture, caring for her two young nieces every day while her family lived with her sister’s family, and making meals from scratch every day for 10 people – she was unable to fulfill her ultimate dream of becoming a U.S. citizen. She had almost made it; she passed all parts of the test except one: the verbal English exam.

“She came to us in tears,” recalls Pamela Church-Pryor, Community Ministries Director at The Salvation Army Norridge Citadel Corps Community Center. Iman had been frequenting the center’s food pantry for a couple years, originally seeking help there at the suggestion of friends who knew how difficult it is to start over in a new country. Though she and her husband had enjoyed successful careers in Jordan, the economy was difficult, prompting them to seek a better life for their family in the U.S.

Pamela had found Iman to be “a sweet, gentle woman who is proud of her family and the opportunity to live in America,” and she knew she had to help. It was understandable that Iman had struggled with the verbal portion of the test; her husband got practice speaking English every day at his job as a valet, and their children – now ages 21, 19, 15 and 12 – got practice at school. Her husband and their two oldest children had passed the naturalization test just fine. But Iman was at home all day with her two young nieces, cooking, cleaning, and caring for two families. “I had no place to go to practice,” Iman said.

So Pamela organized daily tutoring sessions for Iman, with some of her best volunteers spending a couple hours a day, Monday through Friday, helping her practice English. The goal was to prepare her to take the naturalization test again – this time to pass and fulfill her dream of becoming a U.S. citizen. 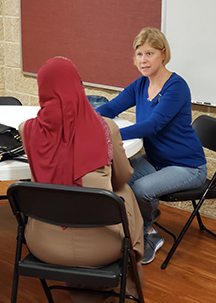 For two months, Iman met with a different tutor each weekday. They would sit in whatever quiet room they could find in the church and go over the test, read books, and discuss the complexities of the English language. “It’s not easy learning English,” Iman said. “I would read a story, practice writing. And always talking. They would tell me when I used a wrong word. I would repeat correctly.”

“I was very impressed with her,” said Chris Berkheimer, the Thursday tutor. “On our first meeting she brought in the whole test she’d taken, and every word that she didn’t know she had looked up.” Chris found her eager to learn. “Anything I said that she didn’t understand, she stopped me and asked. ‘Faucet? What is faucet?’”

On Tuesdays, Iman met with Jean Brooksbank, a fellow immigrant (from England) who empathized with Iman’s attempts to navigate the bureaucracy of immigrating. “I felt for her desperation,” she said, noting that the English test on the citizenship exam can be pretty specific and exacting. But Jean wasn’t worried for Iman. “She’s a smart cookie!’

Denise Ronstadt, the Wednesday tutor, also found Iman to be very determined. “I knew right away this woman is going to do this!” she said. While their first few sessions were more formal and structured, “by the end we were just two women talking about recipes, parenting, report cards. It was really wonderful.”

The women watched Iman’s English, and her confidence, grow. And as they talked about vocabulary and pronunciation in various corners of a Christian church building, they came to know this Muslim woman as a friend. “We loved getting to know Iman even better, enjoying her Arabic cooking and learning phrases of Arabic,” Pamela said. “Iman brought her daughter and a niece to the corps one Sunday and thoroughly enjoyed the singing and the message from the Holy Book!”

Iman assumed a new role at the Norridge center after she watched Denise’s husband volunteering at the food pantry one day. When Denise explained what he was doing, Iman responded, “’I want to do that. I need to give back to The Salvation Army.’ She’s been there each Wednesday ever since waiting at the door for him, there to help.”

“The Army are very nice people,” Iman said. “I told Pamela, ‘I do anything to help.’”

After two months of tutoring sessions five days a week, Iman took the citizenship test again, this time with a whole group of tutors and staff at the Norridge Corps rooting for her. They had confidence she would pass, but were nervous nonetheless.

After it was over, Denise received a two-word text: I passed. “With about three or four exclamation points,” she said with a laugh. Jean was at the Norridge site when she, Pamela, and Captain Kristina Sjogren learned the news. “We threw our arms around each other and literally danced for joy,” Jean said, adding there were a few happy tears as well.

“I was very happy,” Iman said. “This time I understood everything.”

When Pamela learned that Iman’s husband had to work the day of her swearing-in ceremony, she offered to accompany her. Iman was one of 122 people becoming citizens that day, representing 49 countries. “Those to be sworn in were asked to stand when the country they represented was announced,” Pamela said. “Iman was the only one from Jordan, and she stood proud and straight.” 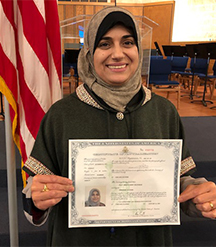 “During the ceremony, we watched a panoramic video of beautiful American scenery and faces of those newly sworn in. It was very emotional.” They recited the pledge of allegiance, sang the national anthem, and those being sworn in recited an oath together. “Strangers took pictures for each other, people smiled and cried together and congratulated each other. It was a beautiful ceremony, one I think every American should witness.”

The tutors were simply happy to witness Iman’s growth. “This was so rewarding for me, changing this woman’s life,” Denise said. Jean agrees, saying, “Our times together were very precious to me. She gave me a sense of pride in living in this country.”

Iman plans to continue taking English classes and even hopes to take some college classes when she has the time and money to do so. If she ever does, no doubt she’ll have a group of women at a Christian community center in Norridge more than willing to help her with her homework, and cheering the loudest at her graduation ceremony.