Event recap: Down for the Challenge rappelling event at Vikings training camp (Video)

Another incredible rappelling event is in the books.

The Salvation Army’s second annual Down for the Challenge urban rappelling event with the Minnesota Vikings took place July 29-30 at Omni Viking Lakes Hotel in Eagan, where more than 200 people descended the 14-story building to fight homelessness. (See photos of rappelers on the rooftop, in the landing zone, and at a party at the Omni.)

Minneapolis mayor Jacob Frey and St. Paul mayor Melvin Carter helped kick off the event July 29 by rappelling together and speaking at a Down for the Challenge party hosted by the Omni. 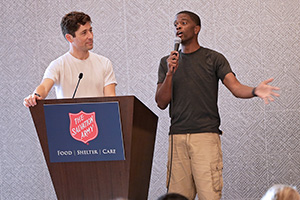 “Melvin and I stared adversity in the face,” Frey said with a laugh, while standing in the Comcast landing zone after his rappel. “We conquered this skyscraper.”

He added: “We came out here to support an extraordinary cause, which is making sure we are working for people who are experiencing homelessness. I can’t think of any more important work.”

The second day of rappelling featured hundreds of women and men of all ages and backgrounds going Down for the Challenge all morning and afternoon.

A rappeler named Priscilla was thrilled to support the event because her family often relied on The Salvation Army for help when she was a child.

“We didn’t have a lot of money while I was growing up, so sometimes we went to The Salvation Army,” said Priscilla, a U.S. Marine Corps veteran. “I always have a place in my heart for The Salvation Army for what they did for me as a child.”

Priscilla rappelled with a team from 23rd Veteran, a charity that supports veterans living with trauma. Rappelling was a thrilling experience that gave her “a flashback of the Marine Corps because we’ve all done this – but it’s been a while,” she said. “It was a really cool feeling.”

From the rooftop, Priscilla and her fellow rappelers got a bird’s-eye view of the Minnesota Vikings holding practice at TCO Performance Center.

The Vikings were proud to be the presenting sponsor of this event. 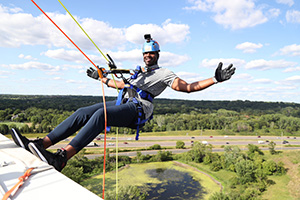 “When you think of the relationship the Vikings have with The Salvation Army and the work they do, it creates a terrific opportunity for us to show support back to the community,” said Martin Nance (pictured), VP of Marketing for the Minnesota Vikings, who rappelled both days of the event. “To see the work they do combatting homelessness means a lot to our organization.”

Nance and the Vikings joined hundreds of other Down for the Challenge rappelers, volunteers, donors and partners in supporting our goal of raising $1 million for Salvation Army housing and homelessness-prevention programs.

These programs are more important than ever, as record-setting costs for food, fuel and housing push thousands of Minnesotans into poverty. The Salvation Army is on the frontlines of this crisis, providing housing and shelter for up to 1,050 people every night in Minnesota, while offering financial assistance and case management services that last year helped save about 3,700 local households from eviction.

Even though Down for the Challenge is over, you can still contribute to this cause by giving a donation and having your gift matched by Cub.

The Salvation Army is grateful to everyone who contributed to this year’s Down for the Challenge event.

“Your support will allow The Salvation Army to help people and families get through these tough times,” said Lt. Col. Dan Jennings, leader of The Salvation Army Northern Division. “God bless you all for being Down for the Challenge.”

View the Down for the Challenge event magazine. 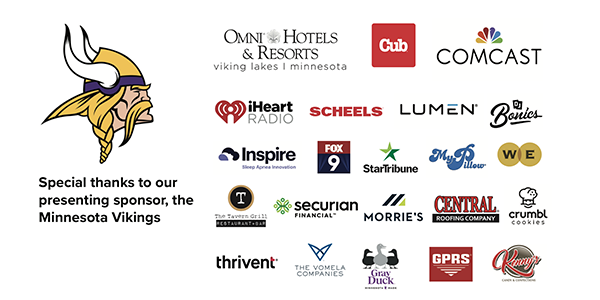