Our Christmas Review online newsletter is packed with exciting news and highlights from The Salvation Army’s 2019 Christmas Campaign in the Twin Cities, Greater Minnesota and North Dakota.

Scroll down to discover fundraising totals and inspiring stories about people touched by the work of our volunteers, staff, and donors throughout the holidays.

Thank you for helping The Salvation Army #FightForGood during the 2019 Christmas season. Your generosity will sustain our life-changing programs and help people win throughout 2020.

Between red kettles, online donations and other giving, Salvation Army supporters gave an incredible $17.5 million during the 2019 Christmas season in the Twin Cities, Greater Minnesota and North Dakota. 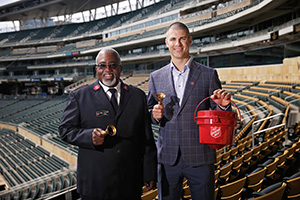 “This is why we call it an Army – an Army of compassionate people coming together to help those who are less fortunate,” said Lt. Col. Lonneal Richardson (pictured right), leader of The Salvation Army Northern Division.

In the Twin Cities, The Salvation Army opened the season of giving by tapping Joe Mauer (pictured right) to serve as Chair of our 2019 Christmas Campaign (read story). The retired Twins slugger encouraged thousands of people to ring bells and give to The Salvation Army. 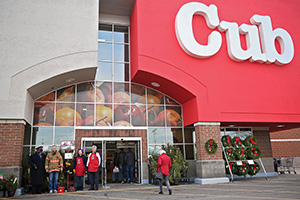 Twin Cities giving hit a fever pitch Dec. 20-24, when all donations were doubled. Nearly $2.6 million was raised in just five days, including $1 million in matching funds pooled by individual donors and corporate givers such as the Richard M. Schulze Family Foundation.

Another fun fact: In five weeks, nearly $870,000 in red kettle donations was raised at Cub grocery stores in the Twin Cities. Cub has hosted red kettles at its stores for decades, for an important reason: “It’s about us being part of the community and taking care of the folks we serve every day,” said Cub CEO Mike Stigers.

In North Dakota and Greater Minnesota, many of The Salvation Army’s 18 locations exceeded their Christmas fundraising goals. 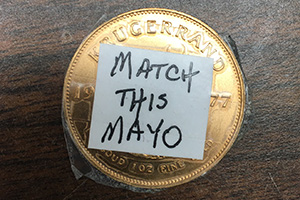 That includes The Salvation Army in Rochester, Minn., which received a huge boost from Mayo Clinic. On Dec. 19 and 20, Mayo matched all kettle donations made in Rochester, dollar for dollar, with no limit (read story). An anonymous donor maximized this opportunity by donating a gold Krugerrand coin valued at more than $1,500 (pictured).

“These matching funds will be of enormous support as we work to meet the growing needs in our community, from preventing homelessness to providing health care and the full spectrum of emergency social services," said Major Robert Mueller, co-leader of the Rochester Salvation Army. "The Salvation Army is beyond grateful to Mayo Clinic.”

Every dollar that The Salvation Army Northern Division raised during the 2019 Christmas season will stay local and fund programs that provide food, housing, youth activities, and other life-changing services for thousands of people in communities large and small. 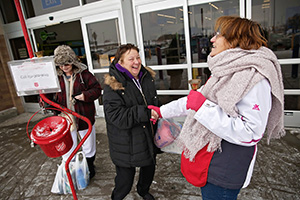 If you volunteered at a kettle, or dropped money into one, thank you. You helped raise $2.5 million worth of kettle donations in the Twin Cities, $2 million in Greater Minnesota, and $1.2 million in North Dakota. The Salvation Army will use every penny of those donations to change lives.

The kettle season began in mid-November, when Salvation Army locations throughout Minnesota and North Dakota held kickoff events inside shopping malls, outside of grocery stores, and other venues. For the first time ever, kettle donors had the option of giving electronically with a bump of their smart phone using Apple Pay or Google Pay. 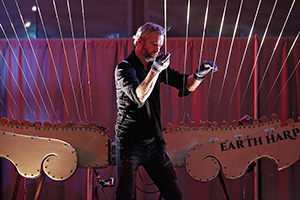 A Twin Cities kettle kickoff event was held Nov. 22-23 at the Mall of America, where famed musician William Close (pictured) – a finalist on the TV show America’s Got Talent – played his world-famous Earth Harp, which holds the Guinness Record for largest playable stringed instrument (read about the event).

“The Salvation Army does amazing work – and it is amazing to be here celebrating that work,” Close said. 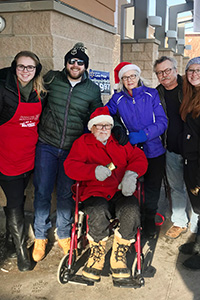 The kettle season continued until Christmas Eve, during which time nearly 17,500 volunteer bell ringers gave more than 46,000 hours at red kettles throughout Minnesota and North Dakota.

One of those bell ringers was Thor Nordwall (pictured right), a 99-year-old World War II veteran who moved to America from Sweden when he was just 3 years old. He and his family have been ringing bells for decades, as a way to give back to The Salvation Army for supporting Thor during the war.

Another bell ringer was a seventh-grader named Sami. He rang bells with his classmates outside of a Wal-Mart store in Blaine.

Sami summed up the spirit of bell ringing perfectly: “The most important part of doing this is helping people,” he said. 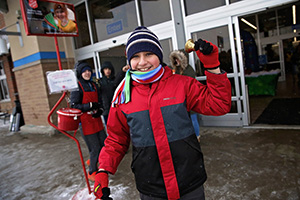 Sami (pictured right) and thousands of other bell ringers were catalysts for all kinds of unique and incredible kettle donations, such as:

Hundreds of businesses helped make the 2019 kettle season a success by offering their employees as bell ringers and by providing matching dollars that spurred kettle donors to give even more. Some of the businesses that provided matching dollars include:

Kettle donations are vital to the day-to-day operations of The Salvation Army’s Worship and Service Centers in Minnesota and North Dakota, providing food, youth programs, counseling, and other life-changing services.

Your donations of time and money allowed Salvation Army locations across Minnesota and North Dakota to spread the love of Jesus Christ to thousands of children and families. We made their holidays happy by providing toys and hot meals, along with groceries for Thanksgiving and Christmas feasts. 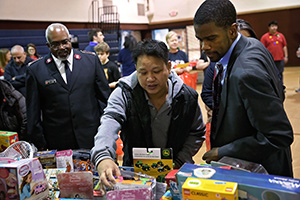 In the Twin Cities, seven toy distributions were held throughout the metro area. About 150 volunteers per day helped at each location, stocking toy shelves and helping parents “shop” for toys (see photos). St. Paul mayor Melvin Carter (pictured right) joined the fun and volunteered at the West 7th Salvation Army in St. Paul on Dec. 23. In all, the Toy Shops blessed 4,672 households.

One of those households belongs to Leslie, a hardworking single mother of four kids, ages 2, 5, 9, and 12. The Minneapolis resident moved to Minnesota in August after living in Mexico for the past three years. Without Toy Shop, her kids might not have received any Christmas presents. 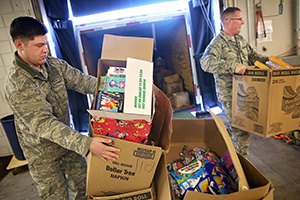 “I just got my own apartment last month, so money is tight while I get on my feet,” said Leslie, who picked out Hatchimals, board games, and other toys for her kids. “Toy Shop is such a big help.”

Although a toy shortage loomed in early December, the Twin Cities community banded together to fill the gap – including big donations from King of Kings Lutheran Church in Woodbury (1,500 toys) and the 133rd Air National Guard (1,000 toys, pictured right). 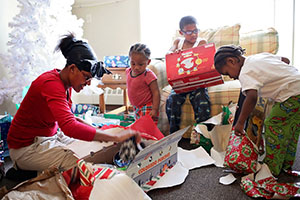 Additional Toy Shop events were held at Salvation Army Northern Division locations across Greater Minnesota and North Dakota. That includes Duluth, Minn., where thousands of toys were distributed thanks to donations received at the incredible Bentleyville Tour of Lights holiday display.

And in southern Minnesota, hundreds of families in need benefitted from $5,000 worth of toys donated by employees of Hormel (read story). 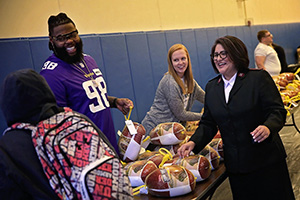 “To be a part of this event means the world to me,” said defensive lineman Linval Joseph (pictured).

The Salvation Army and our volunteers also served hot meals. Thanksgiving dinners – complete with ham, potatoes, and all the fixings – were served at 14 of our locations in Minnesota and North Dakota, along with hot Christmas dinners served at six locations.

Many generous businesses and organizations supported The Salvation Army throughout the 2019 Christmas season.

Here are just a few examples of the fun and creative ways our valued partners helped fight for good in Minnesota and North Dakota: 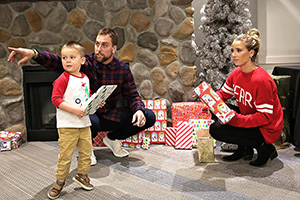 – Minnesota Vikings wide receiver Adam Thielen threw a Christmas party at Mall of America for five Salvation Army families in need (view photos). The two-hour event on Dec. 20 featured dinner, personal time with Thielen, piles of presents from the Thielen Foundation, and other gifts (read story). Additionally, the Mike Zimmer Foundation and members of the Vikings' offensive line provided thousands of dollars worth of Christmas presents for nine families in need.

– The Richard M. Schulze Family Foundation contributed $250,000 toward our $1 million matching opportunity Dec. 20–24 in the Twin Cities. Schulze, a long-time supporter of The Salvation Army, founded Best Buy and grew up in St. Paul. 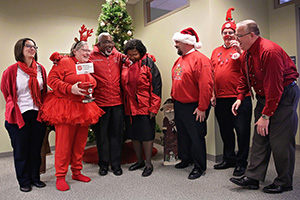 – Attendees of the Michael W. Smith and Amy Grant concert at Target Center on Dec. 6 donated 800 toys, with another 100 toys given by employees of KTIS 98.5.

– Volunteers from Woodbury Lutheran Church rang bells for nearly 130 hours. Since 2006, the church’s bell ringing efforts have raised more than $160,000. 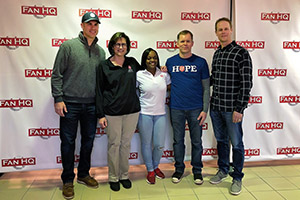 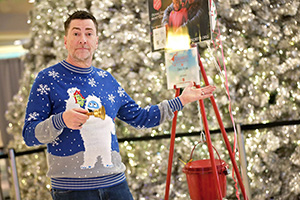 – The Trans-Siberian Orchestra donated $1 of every ticket sold for its two concerts at Xcel Energy Center on Dec. 28. Total raised: nearly $25,000.

– Blue Door Pub donated 1,300 Thanksgiving meals that were served at Salvation Army locations in the Twin Cities. Additional meals were provided by Trellis Hospitality and its clients.

– Donors from the William Booth Society celebrated the Christmas season together during a Dec. 2 event at the James J. Hill House in St. Paul. 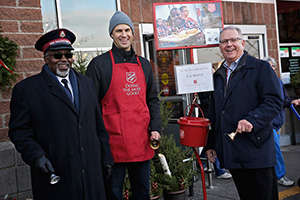 A great way to support The Salvation Army’s year-round efforts is to give monthly. By becoming a recurring donor, you will provide a steady stream of income that The Salvation Army can depend on to serve others – month after month.

Or, if you would prefer to make a one-time gift:

Thank you for supporting The Salvation Army during the 2019 Christmas season and throughout 2020. You are a blessing.