Donations in Action: A listening ear 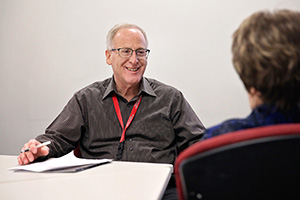 A single mother walked into our office in need of help paying her electric bill. She looked overwhelmed. We asked her what was wrong, and she began to tell us.

As it turned out, the majority of our conversation didn’t pertain to the emergency help she needed. The woman explained how she and her kids had moved to this area last year. She felt isolated because she belongs to a minority group that is not highly represented in our community. She felt tired from working so much, and lonely from being far away from her extended family. We discussed how stressful her situation must feel to her and her kids.

Our talk shifted to self-care and how we cannot care for others if we are not caring for ourselves. We then contacted a nearby counseling office and requested an appointment for her and her kids.

At the end of our conversation, we helped pay the woman’s overdue electric bill. She was thankful for the assistance, but even more thankful that somebody was willing to listen to her.

Sometimes, you just need someone to talk to.

Home for the holidays

During one of our Toy Shop events in Minneapolis – on one of our busiest days of the year – a woman came to us in need of emergency rental assistance. She was worried she would be evicted by Christmas.

The woman had worked as a bus driver, but due to unexpected medical issues, her employer was forced to transition her to the position of van driver – a job with less pay. The woman had tried to offset her decrease in income by picking up a part-time job, but it still wasn’t enough and she needed financial help.

One of our social workers stepped away from Toy Shop and submitted a grant to a local foundation on the woman’s behalf. Several days later, the woman was approved. The social worker called the woman several times to explain the good news, but the woman never answered, so all the social worker could do is leave a message.

A few days later, on Christmas Eve, the social worker left our building after volunteering to help serve a community meal. In the parking lot, a van drove up next to her and stopped. Out of the van jumped the woman, who ran to the social worker and hugged her, crying tears of joy. The woman explained how grateful she was that The Salvation Army had taken the time to help her, even on one of its busiest days of the year. She was thrilled to say that instead of being evicted, she would be home for the holidays.

Recently we partnered with Slumberland and other organizations to provide new beds for children in the Fargo/Moorhead area who’d been sleeping on the floor. This partnership allowed us to drop off 10 new beds for several families in desperate need.

One of the beds went to a 4-year-old boy who’d never had a bed of his own. He jumped up and down when he saw his new mattress, box spring and sheets. We have never seen a little boy so happy.

This program reminded us that beds are a luxury that many people take for granted. To these children, having a new bed to sleep on was better than almost any gift they could receive.

Lately we’ve been helping a single mom who lives in an apartment with her two children, plus her two nieces she took in after her sister died. Ever since the recent doubling of her family’s size, this woman has struggled to keep up with the extra resources needed to raise four little kids.

Despite these challenges, this woman remains one of the happiest and politest people we have ever met. She is unflappable, and is always able to find joy in her circumstances.

In November, we helped this woman avoid eviction by paying a portion of her past-due rent. Then, in December, we provided coats and boots for all four of her kids. The kids loved the coats and were so happy.

Serving this woman continues to be an honor. Every time we help her, she overflows with thanks and gratitude.