Few people in the 130-year history of bell ringing have spent more years volunteering at the red kettles than Steve Seltz of Minneapolis, Minn. 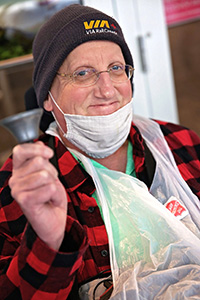 Steve, 62, has made bell ringing a holiday tradition for more than 30 years. Even more amazing is the number of hours he has put in lately: During the past two Christmas seasons, he has rung the bell for a total of 490 hours at Mall of America. (Sign up to ring.)

“The money Steve has raised has helped The Salvation Army to provide food, shelter and care for countless individuals and families in the Twin Cities,” said Lt. Col. Dan Jennings, leader of The Salvation Army Northern Division. “He is one amazing bell ringer.”

Steve was diagnosed with multiple sclerosis about 20 years ago, but he has never allowed the disease to stop him from accomplishing lots of good. He volunteers for other charities throughout the year, then takes the entire month of December off from his other commitments to ring the bell.

“I’m not going to sit around and watch TV – I get out and volunteer,” said Steve, whose favorite kettle location at Mall of America is Skyway Level 2 along East Broadway, where he is scheduled to ring for an incredible 280 hours this Christmas season.

Steve has been ringing for so long that he remembers volunteering at a kettle outside Montgomery Ward at Southtown Center in Bloomington, before the department store closed in the 1990s. He originally started volunteering for The Salvation Army after a girlfriend of his spent a month at a local Salvation Army shelter until she could get back on her feet.

“I was impressed with that program,” Steve said. “Help is still needed because the homeless population is ever-growing and there are encampments around all year.”

Dollars raised from bell ringing support local Salvation Army programs that provide food, shelter and care for thousands of people all year long. Just one two-hour shift at a kettle typically raises about $60 – enough for The Salvation Army to provide a hot meal, shower and night of shelter for a person experiencing homelessness.

Steve encourages everyone to sign up for a bell ringing shift this Christmas season. With hundreds of kettle locations throughout Minnesota and North Dakota, you’re sure to find a convenient spot to ring.

“If you have a heart, use it all day long,” Steve said.