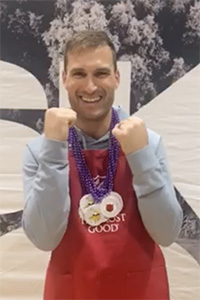 The “Kirko Chainz” movement is still alive after all.

On Thanksgiving night, Salvation Army volunteers will distribute thousands of the same necklaces outside U.S. Bank Stadium before the Vikings’ game vs. the New England Patriots. The necklaces include a QR code that fans can scan to enter to win awesome Vikings memorabilia – including a signed Dalvin Cook jersey and signed Justin Jefferson photo.

“Give and be generous – that is our heart and desire for whatever opportunities are provided to us,” Cousins said Nov. 15, while at the West 7th Salvation Army serving a hot Thanksgiving meal for the local community. (Read more about his visit.)

Prior to the game, Red Kettles will be scattered around the stadium for fans to donate. All kettle donations will be matched, up to $7,500, courtesy of Mac Truck. The macaroni and cheese company will also give The Salvation Army a portion of its proceeds from sales at its two food stands inside U.S. Bank Stadium.

All donations made to The Salvation Army will stay local and help provide food, shelter and care for thousands of families in Vikings country. 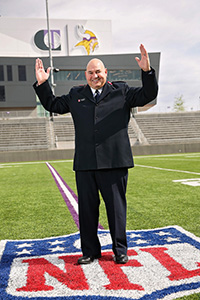 “We are excited to connect with Vikings fans this Thursday,” said Lt. Col. Dan Jennings (pictured), leader of The Salvation Army Northern Division. “We encourage everyone at the game to get involved with The Salvation Army this holiday season and throughout the coming year.”

“Skol!” Jennings added, while clapping his hands over his head.