Former TV sports anchor Dan Williamson has been hired as Director of Development at the Duluth Salvation Army, replacing Gordon Mesedahl, who retired after a long and distinguished career. 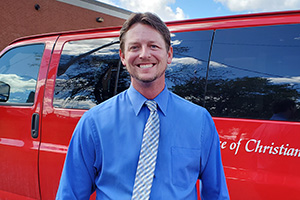 Williamson has spent nearly two decades in broadcast journalism and has worked at a number of television stations in the Midwest. Most recently, he was the sports director/anchor at WDIO-TV in Duluth. His broadcast career began in his hometown of Alexandria as a news and sports anchor at KSAX-TV. He later became the sports director/anchor at KXMB-TV in Bismarck, N.D. He has also served as a reporter/photographer/producer for Lifetouch Media Productions in the Twin Cities for the syndicated program "Life to the Max."

Williamson earned his bachelor of science degree in mass communication/broadcast journalism from St. Cloud State University, where he was honored as the Outstanding Graduate of the Year in Mass Communications. He has also been honored with a variety of awards for his work in journalism and was part of multiple Emmy Award-winning newscasts.

Williamson is looking forward to his new role with the Duluth Salvation Army.

“I am excited to be part of a church and organization that does so much good,” Williamson said. “We are all neighbors and we are all in this together.”

In his spare time, Williamson plays golf, baseball/softball, volleyball, inline skating, and water sports. He also enjoys spending time with his family and friends, traveling, cooking, and going to the movies. He loves endurance racing, having completed Grandma's Marathon and the NorthShore Inline Marathon.