Below are several examples of how our officers, staff members, volunteers, and donors are thinking outside the box to make a positive impact on those affected by this historic crisis.

The COVID-19 crisis may be difficult, but it’s bringing out the best in people. 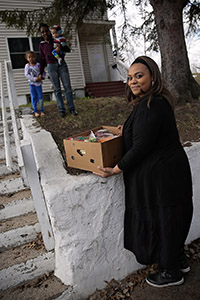 A great example is a woman names Jysicca (pictured) of St. Paul. For the past two Fridays, she has been stopping by the West 7th Salvation Army in St. Paul to pick up food for people who are unable to leave their homes. Every Friday, this location gives out any remaining food that would otherwise spoil during the weekend.

"We gave Jyssica 13 boxes of produce to give to her neighbors,” said Lt. Jonathan Taube, leader of the West 7th Salvation Army. “We plan to load her up again this week.”

“Everyone kept thanking me,” Jyssica wrote in a post to her neighborhood Facebook group. “My response was to God be all the glory, and thank The Salvation Army because without them, this would’ve been hard for me to do by myself.” 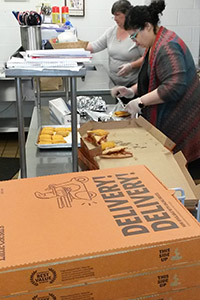 The pizzas were served April 17, when about 100 people stopped by to enjoy a slice or two.

“We are grateful to these donors for not only helping The Salvation Army, but also supporting one of our local restaurants,” said Captain Teri Ellison, leader of the Duluth Salvation Army.

Earlier this week, the West 7th Salvation Army received an unexpected donation of 200 raw chickens. The generous gift was of tremendous help to this location, where staff and volunteers have been distributing up to 250 food boxes every weekday. 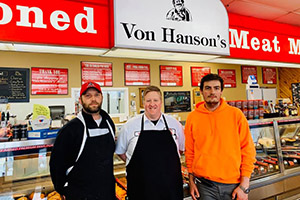 However, there was a problem.

“The chickens arrived in bulk,” said Lt. Jonathan Taube, leader of the West 7th Salvation Army. “They were messy and juicy, and we didn’t have the appropriate supplies to wrap them individually.”

Worried that the chickens could spoil, Taube called a nearby Von Hanson’s Meats shop and explained his conundrum.

The popular Minnesota meat market did not chicken out when called upon to serve.

“They told us to drop off the birds so their team could individually package each one,” Taube said. “Thanks to their help, we could give the chickens to families in need. What an awesome shop.”

This week a man walked into The Salvation Army in Willmar, Minn. and said he wanted to give a small donation to help the community. 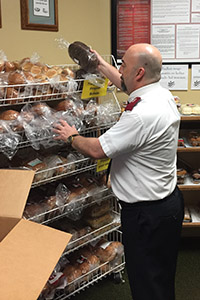 Captain Ron Felt, leader of the Willmar Salvation Army, thanked the man for his gift and began to speak with him.

“The man had the appearance of someone who needed the money he was giving,” said Felt (pictured). “I learned that we had helped this man in the past, and he now had a job and a place of his own. He just wanted to say thanks and let us know he was doing OK now.”

After their conversation ended, the man took a loaf of free bread and went on his way.

This brief interaction left a mark on Felt because it was simple and powerful.

“It made coming to work today worthwhile,” Felt said. “We are one Army, serving one God, together.”