Below are several examples of how our officers, staff members, volunteers, and donors are thinking outside the box to make a positive impact on those affected by this historic crisis.

Close to 370,000 Minnesotans filed for unemployment between March 16–April 7, leaving many unsure of where their next meal will come from. 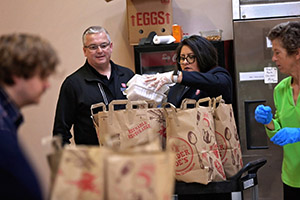 The Salvation Army and Metro Mobility have responded to this crisis by partnering to deliver food to people in need throughout the Twin Cities metro area, free of charge (read more about this partnership or learn how to receive food).

One of the busiest days occurred April 9, when volunteers at the West 7th Salvation Army in St. Paul packed groceries for 110 residents of a nearby senior living facility. Metro Mobility drivers picked up and delivered the groceries to dozens of thankful seniors. 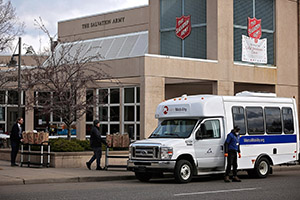 “We’re extremely grateful for Metro Mobility’s generous offer of using their vehicles and staff to help feed those who need it most during this unprecedented crisis,” said Lt. Col. Lonneal Richardson, leader of The Salvation Army Northern Division.

The West 7th Salvation Army is one the busiest Salvation Army locations in the Twin Cities, handing out food boxes to 250 households every weekday, or about 750 pounds of food per hour. Prior to the COVID-19 crisis, only a few dozen families requested this assistance every week.

Minnesota Vikings players and staff have been chipping in left and right to help The Salvation Army raise money for people who are struggling due to COVID-19. 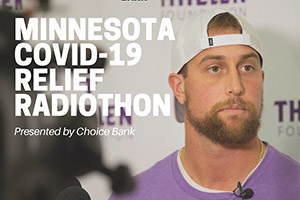 A Salvation Army employee named Greg has been going above and beyond to help people who are feeling lonely and detached during the COVID-19 crisis. 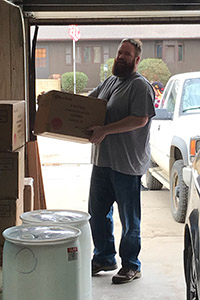 Greg (pictured) works for The Salvation Army in Minot, N.D. Last week, he heard about a local senior citizen named Roger who was feeling sad because he couldn’t be near his friends and family due to social distancing. To make matters worse, Roger’s wife had been hospitalized recently, and he was facing health issues of his own.

“Roger loves face-to-face interactions, but he did not have the technology to see and chat with anybody virtually,” said Captain John Woodard, leader of the Minot Salvation Army. “He was depressed because he couldn’t connect with his loved ones.”

Recognizing there was an important need he could fill, Greg stepped in and found a user-friendly device that would allow Roger to chat virtually with his friends and family. One of his first virtual calls was to his daughter.

Greg went on to set up similar technology for another senior named Shirley.

“I know there are bigger things happening out there, but these selfless acts of kindness stood out to us in our little corner of the world,” Woodard said. “These small acts are how God is glorified through these tragic times.”