Rescue Christmas is a story series featuring real-life examples of how your donations change lives in The Salvation Army Northern Division.

When you donate to The Salvation Army, you help Rescue Christmas for vulnerable people and families in Minnesota and North Dakota. Your generous financial support provides food, shelter, toys, coats, and other critical services for those impacted by the pandemic.

Your compassion helps people like the woman in this story…

Elderly woman happy to be alive

An elderly woman called us, crying. She was scared and didn’t know what to do. 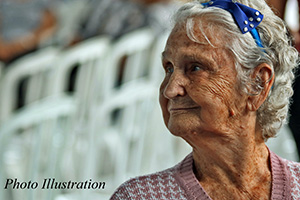 We learned that the woman had just returned home from a hospital, where she'd been treated for pneumonia and heart failure. Due to her weakened condition, she needed to move from the top floor of her apartment complex to the bottom floor. Unfortunately, the woman had missed the deadline to move during her five-day stay in the hospital – meaning she was on the hook to pay for both her old apartment and the new one during the same month.

The woman was terrified by the financial strain she was feeling. On top of having to pay for both apartments, her electric bill was coming due, and she could not afford to pay it.

“The woman told me that she wished she would have died at the hospital instead of coming back to this situation,’” said the woman’s Salvation Army case worker.

Our case worker calmed the woman down and assured her that they would solve the problem together. In a matter of days, the case worker was able to provide enough Salvation Army financial assistance to get the woman through her financial crisis.

The woman was grateful. In the span of just a few days, she had gone from feeling hopeless to feeling happy to be alive.

“This woman had never needed The Salvation Army’s help before,” the case worker said. “She was thankful to know that there are people who cared enough to help her.”