If you like macaroni and cheese, the Minnesota Vikings, and The Salvation Army, then this story for you.

The Salvation Army has developed a delicious partnership with NYC Mac Truck – a national macaroni and cheese company that recently arrived in Minnesota. The company now donates a portion of its sales in Minnesota to The Salvation Army – including sales made at its two food stands at U.S. Bank Stadium during Vikings games, and its products sold at 13 local Hy-Vee stores.

“We’re excited to see these dollars go to work in the community,” said NYC Mac Truck co-owner Lee Pedone. “We want to help put a warm jacket on somebody, or food in their stomach, or help in any other way we can – because that’s what our company is founded on.”

“We love how the Vikings are passionate about the community,” Pedone said. “We want to do our part to give back, too – and that’s where The Salvation Army comes in.” 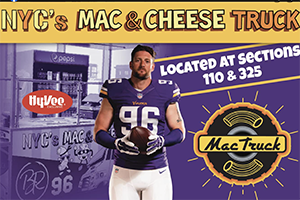 “When I partnered with NYC Mac Truck, one of the biggest things we wanted to accomplish was giving back to the community of Minnesota,” said Robison, a fan favorite who played 11 seasons with the Vikings. “We hope this is the first step of a long relationship.” (Watch Robison explain more.)

The Salvation Army hopes the same.

“We are grateful for our new partnership with NYC Mac Truck and the company’s shared commitment to providing food, shelter and care for Minnesota families in need,” said Lt. Col. Dan Jennings, leader of The Salvation Army Northern Division.