Donations in Action: No need to panic

Below are several examples of how our officers, staff members, volunteers, and donors are making a positive impact on those affected by this historic crisis.

No need to panic

A woman called us, panicking. She didn’t speak English.

Thankfully, one of our social workers spoke the woman’s native language. We learned that the woman had lost her job due to COVID-19. She was worried about not being able to leave her home and not having enough food to eat. 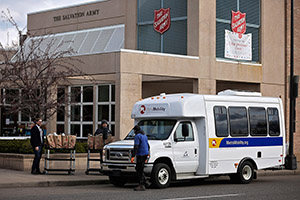 We found out that the woman didn’t live far from The Salvation Army in Brooklyn Park, Minn. We called that location and arranged for food to be delivered to the woman’s home via Metro Mobility. During the past several weeks, Metro Mobility has delivered food to hundreds of people who need groceries from Salvation Army food pantries.

We explained to the woman that she would no longer need to panic about being under quarantine without enough food to eat. The woman was grateful for the help she received from The Salvation Army and our partners.

The Salvation Army Adult Day Center in Maplewood last Friday hosted a reverse parade in the facility’s parking lot. Program participants, driven by their caregivers, smiled and cheered as they rode past staff and volunteers who played live music and held up signs of encouragement. 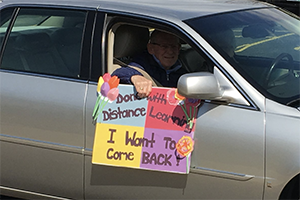 One of the program participants held a sign of his own, which read: “Done with distance learning. I want to come back!”

The Adult Day Center provides award-winning care for people living with dementia and other disabilities. It has been temporarily closed for two months due to COVID-19.

The center’s staff and volunteers have been doing many other things to keep the participants engaged during the COVID-19 crisis, such as sending them care packages, and stopping by their homes with cardboard signs that say things like “We love you” and “We care for you.”

The Salvation Army Northern Division has been distributing tons upon tons of groceries to struggling families throughout Minnesota and North Dakota. 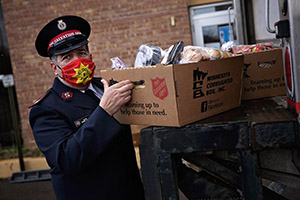 Delivering so much food comes with an added expense that few people think about: the cost of bags and containers.

The Salvation Army’s partners have stepped up to fill this need. In the Twin Cities, Lunds & Byerlys alone has donated nearly 50,000 plastic bags and $25,000, while Tilsner Carton Co. and Minnesota Corrugated Box have given thousands of cardboard boxes.

Other partners include Cub, Hy-Vee and Jerry’s Foods, who together have donated thousands more bags.

An elderly couple came to us in need of financial assistance after a slew of unexpected circumstances had brought them to their knees.

First, the couple needed help paying their property taxes because they had been forced to spend all their savings on fixing their car’s transmission. On top of that, the couple was dealing with the added stress and expense of having their daughter, son-in-law and grandchildren move into their home after the family had lost their employment and housing due to COVID-19.

The Salvation Army helped by providing a steady stream of food for the entire household. And, thanks to our generous donors and our partnership with the St. Paul Foundation, we were able to pay a portion of the couple's property taxes.

The elderly woman later called us to say how thankful she was for The Salvation Army’s help, saying that she had previously reached her breaking point and could no longer handle the stress of her situation.