In 2020, many around the world are experiencing tough times due to the COVID-19 pandemic. But for those who like hoops, help in this tough time is coming from a caring 12-year-old boy named Nathan Easty. 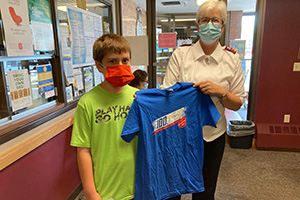 Basketball is a big deal to Nathan. The seventh-grader at Lakeview Christian Academy in Duluth, Minn. is a fan of the Minnesota Timberwolves and calls Dallas Mavericks forward/guard Luka Dončić his favorite player. Nathan’s whole family knows a thing or two about jump shots. He's the youngest of five brothers who have participated in the Duluth Salvation Army's Rookie Basketball Association (RBA), where their dad Jason is also a coach. The family has been part of the RBA since 2006.

“I started playing in first grade,” Nathan said. “I wanted to do what my older brothers did and that influenced me to play and be good. I am a shooting guard and I pass as often as I can.”

The pandemic has made it hard for Nathan and other kids to play as often as they'd like. With that in mind, Nathan found a way to give an 'alley-oop' of sorts. After learning that some other kids around his age couldn't afford to join him on the court, Nathan and his mother, Amanda Easty, hatched a plan to sell the family’s old bicycles and donate the proceeds.

“My mom asked me to pick a charity,” Nathan said. “We talked about which ones and I definitely wanted RBA because I love basketball.”

His vision was “Bikes For Basketball,” with the idea of raising money for RBA scholarships for kids in need.

The RBA is for children between the ages of Kindergarten and eighth grade and it just celebrated its 32nd year of existence. Year 32 was the league's biggest, with 511 kids, 98 volunteer coaches, and 52 teams. The RBA offers seasonal sessions, 3-on-3 opportunities, and clinics. Through the game of basketball, kids are taught life lessons, team building, and sportsmanship while they also develop on-court skills.

Over the years, many RBA players have gone on to suit up on big stages. Among them, Lakeview Christian Academy alums Anders and Bjorn Broman. They are Numbers 1 and 2 on Minnesota's All-Time High School Career Scoring list, respectively, and both played in March Madness as members of the Winthrop Men's Basketball Team that reached the NCAA Division 1 Men's Tournament in 2017. 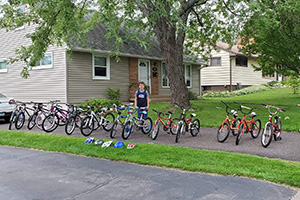 March Madness might not be in everyone's future, but Nathan would like for those who simply want to play basketball to be able to do so. The Easty family had 12 bikes of their own to sell and others contributed as well. “We used social media platforms to request donations,” Amanda said. “We received bikes, shoes, and cash to help the sale.”

With Bikes For Basketball, Nathan sold used bikes for between $5 and $50, and gently used shoes for $5 at a gathering on Aug. 22.

“We originally had a goal of a $50 donation. It took off and really became a big event,” Amanda said.

Television coverage from multiple area stations helped spread the word of the event too. 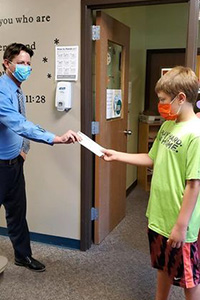 “I think Nathan's ability to put others first is extraordinary,” said Kris Mallett, the RBA Coordinator with the Duluth Salvation Army. “But isn't that the goal? For us to show ultimate love is to make a sacrificial act for the benefit of others. That's our RBA definition of love, and it's the action that Nathan took. When we are passionate about something, like Nathan is about basketball, uncommon actions, wanting other kids to be able to play, become common.”

Nathan’s mother is extremely proud of him.

“He loves people and the fact he sold his own bike to a boy who had his stolen was a really big deal,” Amanda said. “To see the money Nathan collected for scholarships was great.”

Because of the pandemic, details for the next RBA season are still being worked out so that kids can return to play in a safe way. But when the dribbles and layups resume, there will be some happy hoopsters thanks to Nathan's hard work, generosity, and kind heart.

“It (RBA) is good, especially in the winter,” Nathan said. “Just to be on a team, and kids can exercise their body and hoop!”