This morning at The Salvation Army in Rochester, Minn., local couple Sean Thomez and Lisa Dobbelaere attempted to set the Guinness World Record for tallest stack of pancakes. 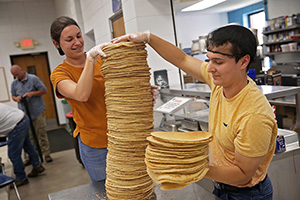 Although the couple didn’t break the record, they had fun trying, and they still came out winners by serving more than 250 flapjacks to dozens of people at the Rochester Salvation Army’s weekday hot lunch program.

“We thought that attempting to break this record would also be a fun way to give back to the community,” Dobbelaere said.

Thomez and Dobbelaere came up a few inches short of the previous record of 3 feet, 4 inches, set in England in 2016. The couple spent eight hours cooking the pancakes, which required 60 pounds of batter.

The idea to break the record came from Thomez, who has been fascinated by Guinness World Records ever since he was a child. 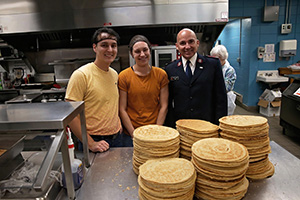