Gunshots lead single mother to a Pathway of Hope

Gunshots boomed outside of Katrina’s home near Chicago, Ill. Three bullets zinged through her house.

One of the bullets came within inches of hitting her teenage son. 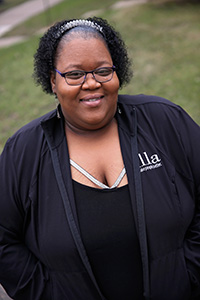 “He could feel the wind from the bullet,” Katrina said.

After that terrifying moment, Katrina knew she had to move her family far away, immediately.

“Somebody was going to die if I didn’t do something,” said Katrina, a single mother. “I sold everything I could sell in my house and drove my kids to Minnesota.”

When the family arrived, they spent months living with friends and in hotel rooms. In order to afford the hotel rooms, two of Katrina’s teenage kids got part-time jobs at a pizza place to supplement Katrina’s income working at a school and grocery store.

“Those were hard times,” Katrina recalled. “All of us were sleeping in one room, some of us sleeping on the floor.”

That was 2018. Today, Katrina and her kids are in a much better place, thanks to her tireless work and your donations to The Salvation Army.

Several months after arriving in Minnesota, Katrina was able to move into a two-bedroom apartment.

“I was grateful to be in a place of my own,” Katrina said. “The kids were so happy. We could finally rest.”

Finding permanent housing was a great first step for Katrina and her family, but they still needed more help to stabilize – and that’s where your donations to The Salvation Army came in.

Katrina got connected with The Salvation Army in Maplewood, Minn., where she enrolled in a long-term mentoring program called Pathway of Hope. The program provides emotional, spiritual and tangible resources for families facing hardship.

Katrina began meeting regularly with a Salvation Army caseworker named Landis, who helped her set goals and make plans to attain them.

“Katrina is a fighter,” Landis said. “She is a determined mother who works hard and does what is right.”

Landis also provided Katrina with practical resources, such as household items for her new apartment, school supplies, winter coats, a regular supply of food, Christmas presents provided by the Thielen Foundation, and much more.

“Anything (Landis) knew I could use, she made sure to tell me about it,” Katrina said. “I appreciate her to the fullest.”

Today, Katrina is doing better than ever. She has an excellent job, a bigger car, and a larger home.

She works as Director of Nutritional Services at a residential healthcare facility in Minneapolis. It’s a high-level position with many responsibilities, including hiring and managing staff members, ordering food, educating and mentoring employees, and much more.

Her favorite food to cook is soul food.

Last October, she upgraded her living situation by moving into a three-bedroom townhouse in St. Paul.

“It’s bigger and has much more privacy,” she said. “It’s so peaceful.”

Katrina is proud of how hard she has worked to overcome all of the adversity she has faced.

“You don’t know how many times I wanted to give up,” she said. “I always told God to direct my footsteps. What I went through did not break me, it built me.”

“I don’t know what I would have done without Landis and The Salvation Army,” she said. “I’m so thankful.”