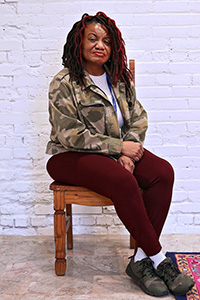 Glenda Eldridge is living proof that patience, positivity and perseverance pay off.

In 2005, she arrived at The Salvation Army Harbor Light Shelter in Minneapolis, homeless. She was in her early 40s and unemployed, without a college degree.

She has since come a very, very long way: She now has a college degree, and she recently began working as a case manager at The Salvation Army’s new women’s shelter in Minneapolis.

During the 17 years in between, the work that Glenda put into overcoming her challenges was absolutely remarkable.

Glenda, 56, came to Minnesota from Chicago in 2005 after her youngest of two daughters graduated from high school.

“I wanted a life change, so I quit my job and moved here,” said Glenda, who had spent decades living a stable life working as a security guard and in customer service.

Her stability ended soon after she arrived in Minnesota. She couldn’t find a job, and soon she ran out of money. She became homeless and began to spiral, grasping at anything that could offer stability – including several unhealthy relationships.

“I didn’t have a lot of street knowledge, and I didn’t know anything about keeping healthy boundaries,” Glenda said.

She would spend the next two years bouncing between Minnesota and Pennsylvania, occasionally working, and occasionally staying at The Salvation Army Harbor Light Shelter in Minneapolis.

In 2010, Glenda ended all of her unhealthy relationships. With no place to go, she came to the only place of safety she knew: the Harbor Light Center, where she enrolled in a long-term wellness program.

During the next nine months, The Salvation Army gave Glenda a safe place to stay, three meals a day, and nonstop spiritual guidance.

“It was a tremendous help,” Glenda said. “I didn’t just read the Bible every day – I had to live it. I learned to take ownership of my mistakes and not play the blame game. It was my first introduction to the term ‘healthy boundaries.’”

Just when Glenda was about to graduate from the rehabilitation program, she developed neuropathy in her feet and fingers.

“By the time I left the program, I needed a walker,” she said. “I also needed a personal care attendant for a year.”

For the next 10-plus years, she lived in subsidized housing and received disability payments, occasionally working in security when she had the strength. 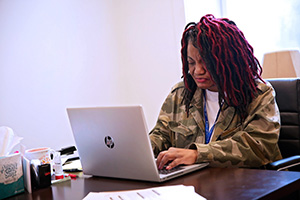 In May 2021, she graduated from college with a degree in individualized studies.

“One of the proudest moments of my life,” she said with a smile.

“I realized it was more in my mind that I couldn’t walk,” she said. “So when my walker broke, I decided not to get a new one. I took a leap of faith, and soon I could walk on my own again.”

In June 2021, Glenda built on that momentum by securing a job as a shelter advocate for a former Salvation Army shelter in St. Paul.

“I wanted to go back to where my heart is – The Salvation Army,” she said. “I love what they do for people. I love how they help people at the lowest part of their lives, and how they don’t refuse anybody.”

The job became a stepping stone for a new position she took in January: Case manager at The Salvation Army’s new 30-bed women’s shelter in Minneapolis (pictured). The facility provides long-term housing and support for women walking in the same shoes that Glenda once did.

“I can relate to these women,” she said. “I’ve been homeless, and I’ve been in the situations they’re in. After all I’ve been through, I have the compassion, patience and wisdom to give them good direction.”

Glenda is thrilled about her new life, and she is grateful for the help she received from The Salvation Army thanks to your donations.

“God has brought me a long way,” she said.