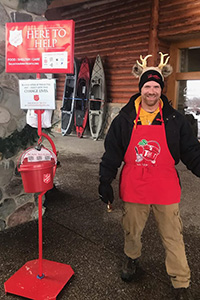 Matt Verness is a Salvation Army bell ringer who knows firsthand how important kettle donations are to people in need. (Sign up to ring bells or donate now.)

For many years, Matt and his wife, Trisha, needed all the help they could get. They spent a decade addicted to methamphetamine while living in Forest Lake, doing any and everything they could to feed their addiction.

In 2016, Trisha’s drug abuse became so serious that she lost touch with reality.

“I was hearing voices and seeing things,” she said. “It was really bad.”

One night, Trisha began screaming at Matt and hitting him. The police showed up and found a large amount of illegal drugs in Matt’s possession. He would spend the next six months in jail.

Trisha wouldn’t be far behind. A month later, she got into an argument with her mom that turned physical. The police hauled Trisha away and she also went to jail.

“We were totally lost,” Matt said.

Trisha and Matt began to change when they came to The Salvation Army for help.

In January 2017, Matt checked himself into a Salvation Army rehabilitation program for men. For seven months he received food, housing, addiction counseling, and spiritual support.

Trisha enrolled in treatment as well and spent months visiting Matt at the rehabilitation center. Later that year, the couple began attending a Salvation Army support group for formerly incarcerated men and women. They also started going to church every Sunday at The Salvation Army in Brooklyn Park.

“The people and the resources at The Salvation Army were amazing,” Trisha recalled. “I kept wondering, ‘Who are these people? Why do they care about us so much?'"

Eventually, the couple accepted Jesus Christ as their personal savior. Ever since, their lives have gotten better and better. Both of them now have full-time jobs – Matt is a delivery driver, and Trisha works at the new Salvation Army Store in Rogers. In February they got married at the Brooklyn Park Salvation Army, and they now own their very own house. 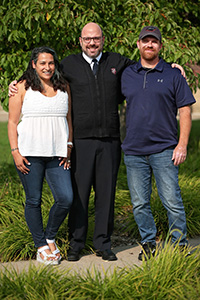 What’s more, Trisha has restored all of the fractured relationships in her life, including her son, 26; daughter, 20; and another daughter she gave up for adoption 18 years ago. She now talks to and sees all three of them regularly.

"Matt and Trisha are living examples of what God can do when we surrender our lives to His transforming love," said Auxiliary Captain Josh Polanco (pictured with Matt and Trisha), leader of the Brooklyn Park Salvation Army. "We are so proud of them."

Matt and Trisha are excited about their future and thankful for everything The Salvation Army has done to help them, thanks to your kettle donations and other financial support throughout the year.

“The Salvation Army is everything to us,” Matt said. “Without them, we would not be here today.” 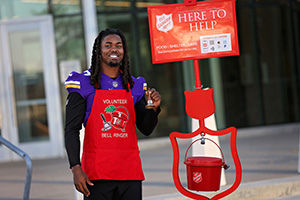 Registration is open for the 2022 bell ringing season. Sign up to ring.

The Salvation Army needs more bell ringers than ever this holiday season due to rising inflation. Your time volunteering at a red kettle will help local families who cannot afford the rising costs of food, gas and housing. (Read why Vikings wide receiver K.J. Osborn (pictured) supports The Salvation Army.)

Bell ringing is a fun and easy way to make a big difference, with hundreds of kettle locations throughout the Twin Cities, Greater Minnesota and North Dakota. Recruit your friends, family and coworkers to join you and raise even more money for families in need.