In all the years that Scott “The Reggae Ringer” Clausen has been ringing bells for The Salvation Army, he’s witnessed many touching moments at the kettle. Sign up to ring.

One of those moments occurred last week, outside the entrance to Cub Foods in Maple Grove. Just as Clausen began to ring his bell, he noticed an elderly woman walking in his direction, slowly, from way across the parking lot.

“She had a walker and was moving as slow as a snail,” Clausen recalled. “I wondered how she’d even be strong enough to carry groceries.” 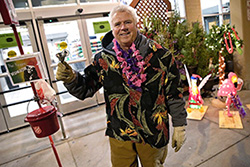 The lady kept walking toward Clausen for what seemed like an eternity. She finally arrived at the store entrance, but she didn’t go inside. Instead, the little old lady reached inside her purse, pulled out some money, dropped it in Clausen’s kettle, and began to walk away.

“I couldn’t believe it,” Clausen said. “The only reason she made that long trek was to put money in the kettle. I looked at her and said, ‘Ma’am, you have made my night.’”

Clausen began ringing 11 years ago and created his “Reggae Ringer” alter ego in hopes of warming the spirits of those passing by his kettle. Every time he rings, he sets out a palm tree along with inflatable pelicans, flamingos and palm trees, with tropical music playing in the background.

“If you ring the bell, you will see the best part of humanity,” Clausen said in a recent TV interview with CBS Channel 4 News.

The most touching moment Clausen has ever witnessed occurred last year while he was ringing outside Macy’s in Minnetonka. He’d just started to ring when a man Clausen’s age walked up and insisted that he ring bells with Clausen sometime.

“I politely told the man to find his own kettle because The Salvation Army needs more ringers,” Clausen said. “But the man said no, and he insisted that he ring with me.”

Reluctantly, Clausen told the man when his next bell ringing shift would be, not thinking that the man was serious about joining him.

Sure enough, the man showed up at Clausen’s next bell ringing shift – wearing a Hawaiian shirt just like Clausen, no less. The man started to ring a bell and dance to Clausen’s reggae music.

Clausen was baffled. Part of him thought the man might be crazy.

“I had no idea why this guy wanted to ring with me,” Clausen said. 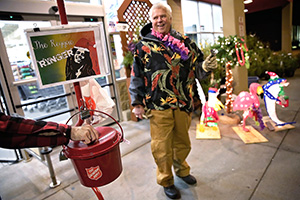 After a half-hour of ringing, Clausen finally asked the man to explain himself. The man replied that his wife had died four months ago, and his children were having an extremely difficult time grieving her loss. The man said that although his kids felt terrible, he was trying to do something good to show them that life goes on and that Christmas is still special.

“Then, about 15 minutes later, all of the man’s kids showed up,” Clausen said. “They were all in their 20s. Everybody hugged, and then everybody starting ringing. It was so powerful.”

When Clausen’s bell ringing shift was over, he went home a humbled man.

“I started that shift not wanting this guy to bother me,” Clausen said. “I left the shifting thinking about how the world is not about me. It’s about helping other people with the things they’re dealing with.”

You, too, can help other people by signing up to ring.

Many more ringers are needed between now and Christmas Eve. The number of volunteer bell ringers has dropped 15 percent compared to last year, resulting in thousands upon thousands of dollars of lost donations.

Bell ringing is a fun and safe fundraising activity that now includes enhanced social distancing and sanitization measures, with Apple Pay and Google Pay options for touchless giving. During a two-hour shift, you’ll raise an average of $60 for Salvation Army services – enough money to provide a day’s worth of food and shelter for a person experiencing homelessness.

No time to ring? There are many other ways to help The Salvation Army Rescue Christmas for families in need.